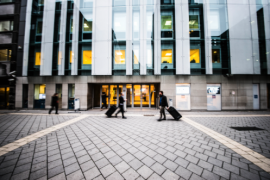 The rough diamond trade in Antwerp during the month of November was marked by a resurgence of imports and exports of lower-priced rough after three sluggish months concerning the volumes of goods traded, while the polished trade experienced a general slowdown.

According to figures from the Antwerp World Diamond Centre, imports of rough diamonds increased by 34% compared to October, yet yielded only a 15% gain in value due to a 15% decline in the average price per carat, which fell from $122 to $104. On an annual basis, the volume of rough imports increased by 3% while falling 12% in value compared to November 2017. On the export side, the volume of goods flowing out of the diamond capital gained 30% compared to last month, but lost 6% in value due to a 27% decline in the average price per carat, from $117 to $85. It is useful to note that Alrosa's rough diamond sales in November jumped 25% in volume compared to October, which the miner said "may be indicative of strengthening demand for low-cost, small-sized rough diamonds, which has been declining over the past few months.” Alrosa is Antwerp's largest supplier of rough goods. De Beers in November also lowered its prices by 12% in smaller, lower-quality goods and 1-2% in medium sizes. These trends show up directly in Antwerp's rough trade. Year-over-year, rough exports fell 33% in volume and 34% in value compared to November 2017 as a result of a very high baseline. November 2017 totaled by far the largest volume of rough exports of any month in 2017.

For the year thus far, Antwerp’s rough-diamond imports have declined by almost 6% in volume to 83 million carats, while the value of those imports has now drawn even with 2017 levels, and currently sits at $9.9 billion. The volume of rough exports from the diamond capital are now down by 7% at 108 million carats, while their value has also fallen by less than a percentage point to $11.4 billion. Since January, polished-diamond imports have risen by 2% in volume and 4% in value to over $10.7 billion. Polished exports have also declined by 2% in volume this year, but the overall value of the polished trade has risen by 2% and also sits at $10.7 billion.