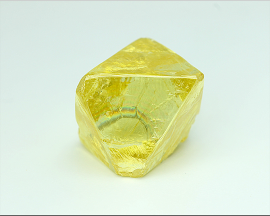 Russian diamond miner AGD Diamonds, which in September acquired an 100% stake in Antwerp-based Grib Diamonds N. V., the international sales arm for rough goods produced at the Grib Diamond Field, held a public auction last week for the sale of special-size diamonds (10.8+), earning a total of $14.1 million. The lots included large-size top-grade diamonds, including a unique bright yellow colored stone weighing 57.03 carats, which had been extracted by the Grib Mining and Processing Unit on June 18, 2018.

The yellow diamond is named “Nikolay Koltsov” in honor of the pioneering geologist who blazed the trail for the emergence of the Arkhangelsk diamond bearing province. The miner sold diamonds from its stocks of 2015-2016, the viewings of which reflected a high degree of demand indicating a stable interest from diamond manufacturers in the market for the exclusive colored diamonds from the Grib mine.

The Grib Diamond Mine is said to be the fourth largest in Russia and the eighth in the world, with an estimated mine life of 15 years. According to Sergey Neruchev, CEO of AGD, the acquisition of a 100% stake in Grib Diamonds was a highly important milestone for the company. “The consolidation of the AGD production business with the Grib Diamonds trading company will create a full-cycle diamond mining company of international standing, comprising geological exploration, production and sales in the long run,” Neruchev said.