De Beers Cuts Prices on Lower-Quality Goods By up to 10% at November Sight, Insiders Say 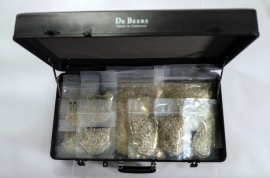 Several sources, including Bloomberg and Rapaport, have reported that De Beers has slashed its prices on lower-quality diamonds at its latest sight this week, with the discounts ranging from high-single digits to as much as 10%. Difficult trading conditions have been widely reported in the rough diamond market in recent months, although the market for higher-quality and larger goods has remained strong with firm pricing in all categories. The etiology of the weak prices for lower-quality goods is traceable to a constellation of ills plaguing the Indian manufacturing industry, as well as a glut of smaller goods on the market. Rapaport specifies that the price declines were for rough costing $100 per carat or less, including both small and large stones that produce polished with low color and clarity. It is difficult to make a clear assessment, however, as De Beers does not make its pricing public.

Indian manufacturers are facing several issues in addition to the seasonal slowdown for the Diwali (Indian New Year) holiday season when polishing units close for several weeks. "The impact of the weakening Indian Rupee, together with the overhang from demonetization and a major fraud in India have combined to reduce the availability of credit offered to diamantaires in the industry," said Stuart Brown, CEO of Canadian miner Mountain Province Diamonds. "A consequence of this has been a price weakening of goods of the small lower quality and brown categories where we have seen price decreases during Q3." De Beers' move to lower prices, which is consistent with price trends on the open market, should protect manufacturers' margins once they return to work.

This is not the first time De Beers has made a gesture to the manufacturers in recent months and years. Sightholders are typically required to take the parcels offered for sale, but in September, the company again allowed its customers to refuse to buy - or rather, postpone their purchase of - some lower-quality stones, with the caveat that they still had to purchase their quota of gems before the end of the year. The price cut this week makes it easier for them to buy their allocation.