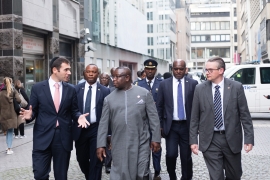 The Antwerp World Diamond Centre today welcomed the President of Sierra Leone, Julius Maada Bio. The presidential delegation’s visit emphasizes the importance of trade relations between Sierra Leone and the Antwerp diamond industry, and falls within the framework of President Bio's efforts to take his country in a "new direction", which includes a strong focus on revising key legislation pertaining to the mining sector to ensure a win-win situation for the government, mining companies and local communities. “I am pleased to inform the international mining community that Sierra Leone is ready for business." he recently stated.

Speaking to industry representatives at the AWDC, President Bio emhasized his desire to benefit from the knowledge and expertise Antwerp can offer as Sierra Leone seeks to broaden the positive impact of the diamond trade on his country. "We are here to learn about an industry that many Sierra Leoneans do not know, but is of great strategic importance for our country." He said he took his own initiative to understand diamonds, following a course in rough diamond valuation, but pointed out that few in government fully understand the potential of this resource. Speaking of AWDC, he says, "We have found the perfect strategic partner. We hope to work together to make sure that Sierra Leoneans, the poorest of the poor, are benefiting from this trade. The AWDC is in a perfect position to help us build a relationship between Sierra Leone and the industry so we can earn as much revenue as possible, and invest in our people. We want to develop the human capacity of our people."

"We are here to connect," he said. "We are here to learn, to deepen our relationship, not only with Belgium, but also with an industry connected to one of our most important mineral resources." He continued, saying, "The only way to build wealth is to be able to increase your export earnings. We should be able to add value to our diamonds in Sierra Leone. We should be able to account for the quantity of diamonds mined in Sierra Leone. Because we are only six months into the New Direction in government, and have said we are going to provide efficient management of the economy and our resources, with diamonds being one of our most important resources, we are looking into how we can structure the relationship between our country and industry." He believes he has taken the first step with his visit to Antwerp.

Sierra Leone is currently the world’s 11th largest diamond producing country in terms of value and the 12th largest in terms of volume. As recently as 2016, the country was the world’s 9th biggest diamond producer, with an output of 549.000 carats, worth $159 million; this figure dropped in 2017 due to the decreased Kimberlite production of the Octéa mine. A significant percentage of Sierra Leone’s rough diamond production, and almost all of its alluvial production is traded on the Antwerp market: In 2017, 150,000 carats, or 52% of Sierra Leone's diamonds were exported to Antwerp for a total value of $87 million; exports to Antwerp represented 71% of the total export value of Sierra Leonean diamond exports, "which emphasizes the importance of maintaining a good relationship," says Antwerp World Diamond Centre CEO Ari Epstein. "By encouraging trade with Antwerp," he told President Bio, "you will set in motion a well-oiled infrastructure to help you achieve your goals of attracting investors, obtaining greater returns on investment from your natural resources, and delivering the maximum benefit to the government and the local communities of Sierra Leone." These are the stated aims of the President.

As part of its "New Direction" policy, the government of Sierra Leone has already taken several steps to transform its mining industry. It is reviewing the country's mining policies and laws - including the Mines and Minerals Act - to establish a comprehensive governance framework for the mining sector that will promote transparency, guarantee good returns for the government and guarantee security for its investors, ultimately to bring benefits to its people. A sweeping review of rules governing small-scale and artisanal mining has also created a regulatory environment conducive to achieving the level of open competition, continuity and security of tenure that can maximise benefits of the activity to the nation.

Sierra Leone has also embarked on a clampdown on illegal mining activities across the country. Changes recently introduced were also designed to minimise smuggling, which previously plagued the mining sector. The government recognizes that the livelihoods of more than half a million people in the country depend on small-scale and artisanal mining activity, which generates an “appreciable amount of economic activity” beyond the revenues directly connected to the minerals recovered. Last year, artisanal diamond production accounted for 63% of the country's the total diamond exports.

"We must reverse the resource curse and ensure that Sierra Leoneans derive maximum benefit from our mineral wealth," National Minerals Agency (NMA) Director General Sahr Wonday recently told Mining Journal. "A key priority is to ensure that our licence-management process is very transparent with allocation of mineral rights based on strict eligibility criteria designed towards attracting only credible investors with proven track records." This includes reviewing all existing Mining Lease Agreements to address the current situation where concessionary tax regimes have not benefited the country. To this end, the Ministry of Mines and Mineral Resources (MMMR) and the NMA recently revoked 40 licences whose mineral rights holders have not been meeting their financial and other statutory obligations. These licences are in some of the most prospective areas of the country and their mineral rights holders have failed to comply, despite repeated warnings, Wonday told Mining Journal. This move is expected to attract new investors with the capacity to meet their obligations.

Sierra Leone has also commenced a comprehensive nationwide airbone geophysical survey and mapping project of the country, after receiving $20 million in funding from the World Bank. The only known kimberlites are in the east of the country, but officials believe there must be more, as artisanal miners are operating successfully in the south. While Sierra Leone is not among the largest diamond producing countries, the country’s significance to the diamond trade should not be underestimated, as the quality of the diamonds mined there is very high. Last year, two significant large diamond recoveries highlighted the country's potential: the Meya Prosperity Diamond, unearthed by Meya Mining and weighing 476 carats, was sold for $16.5 million at a tender in Antwerp, while the the “Peace Diamond” - the 14th largest rough diamond ever unearthed, weighing 709 carats - was recovered at one of Sierra Leone's many small, artisanal mines. Renowned jeweler Laurence Graff bought both stones, paying $6.5 million for the latter at an auction that Martin Rapaport organized.