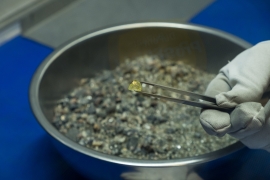 Mountain Province Diamonds, which owns 49% of the the Gahcho Kué mine in the Northwest Territories in Canada, earned $24.2 million in its latest diamond sale in Antwerp, its eighth of the year. The miner sold 366,505 carats at an average realized value of US$66 per carat, which the miner said was in line with their expectations and reflect current market conditions.

"We saw good price bids for our better quality larger goods where the majority of our value lies. In the lower qualities and smaller sizes, we saw average price declines in the mid single digits," the company said in a statement. "We believe the price pressure is predominantly driven by the recent rapid weakening of the Indian Rupee against the US Dollar and to some extent the seasonal lower demand for rough diamonds ahead of the Diwali celebrations," a holiday season which looks it might be arriving early for Indian diamond manufacturers. On a more positive note, the company said it has noted signs of strong diamond retail jewelry sales particularly in the US where demand remains strong, which is welcome as the major selling seasons for the US and Far East markets approach.

"Consumer sentiment in the US remains strong on the back of a healthy economy and strong labour market. The Chinese retail market, and the jewelry retail in particular is also strong and showing positive momentum despite the most recent uncertainty in Chinese Capital Markets." Stuart Brown, the Company’s President and Chief Executive Officer, said, “The eighth sale of the year totalling US$24.2 million was a good result considering the current market and time of the year and we did well to sell all our categories at current best market prices. We are encouraged to see positive diamond jewellery retail sales and we believe that with a positive retail selling season we will see better demand for rough diamonds in the near future.”