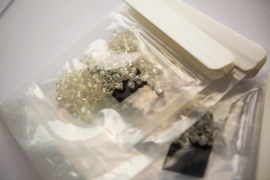 The De Beers Group provisionally sold $475 million worth of rough diamonds during their eighth sales cycle (October 8-12) of 2018, representing the lowest value of sales at a sight this year. October sales fell by about 6% compared to Sight 7 after the actual September sales were revised down to $503 million from the provisional value reported last month at $530 million. Still, the recent sight is a significant, 26% improvement in comparison to the $376 million in rough sales achieved at Sight 8 in 2017.

Bruce Cleaver, CEO, De Beers Group, pointed to currency issues as the main culprit for the slow rough market, as Indian manufacturers are struggling to buy rough: “While the Rupee-Dollar exchange rate has impacted demand for lower value categories," he said, "we continue to see steady overall demand for De Beers Group rough diamonds, reflecting ongoing consumer demand for diamond jewellery in the US.” As of early October, the Indian rupee is at the lowest level versus the U.S. dollar in history, impacting Indian diamond manufacturers which typically buy rough in U.S. dollars.

In addition to impacting the purchase of rough, the strengthening of the us dollar over the Indian rupee is also making it difficult to sell the polished in Asia and in the local Indian market, notes commentator Dudu Harari at Bluedax. "We are increasingly hearing the word “bloodbath” to describe what is happening," he writes. "There’s no doubt diamond manufacturers are the weakest part of the chain. They can’t negotiate the price of rough and they don’t control polished prices." He notes that while manufacturers are struggling, almost everyone else is prospering. He also says that price drops in the smaller, cheaper goods have continued and believes there will be a price correction at the source. "At some mines, where the average price is low and production is based on such goods, the effect of a correction is critical." Sight 9 will take place from November 12 - 16.