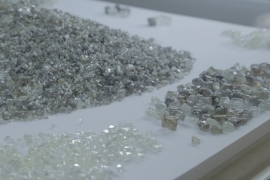 Canadian diamond miner Stornoway sold 184,620 carats in two tender sales for gross proceeds of $24.7 million at an average price of US$103 per carat (C$134 per carat) as price weakness returned to smaller and lower quality diamonds, a decline of 7% compared to the second quarter. Prices in the larger and higher quality items have remained firm. By way of comparison, the miner sold 201,283 carats at two tenders in Q2 for $28.6 million, at an average price of US$109 per carat. The miner points out, however, that on a like versus like basis, diamonds from Stornoway's Renard mine have improved in pricing by 18% to the end of September 2018 since the first sale in November 2016.

Meanwhile, production in the third quarter at the underground mine at Renard attained its full design capacity after what they describe as "a challenging ramp-up period." Third quarter diamond production was 329,306 carats produced from the processing of 597,761 tonnes of ore at an average grade of 55 cpht. This represents significant improvements to both grade and carat recoveries, at 39% and 47% respectively, compared to the second quarter as the company started mining higher grade ore. Matt Manson, President and CEO of Stornoway said, "In addition to higher mining rates, we are also seeing significant improvement in carat recoveries and grade as we open up mining panels in the main body of the Renard 2 kimberlite. Our carat recoveries have improved each month during the quarter and we expect this trend to continue into the fourth quarter." He points out that the diamond breakage that had plagued early production has lessened since they introduced new ore sorting circuit.

“During the third quarter, we saw price weakness return to smaller and lower quality diamonds after more than a year of steady price gains," Manson adds. "Underlying polished diamond demand remains strong in the US market, but is being impacted by currency weakness in the emerging markets amidst global trade concerns. This has put pressure on certain segments of the rough diamond trade. However, attendance at our Antwerp tenders remains strong, and we continue to achieve significantly higher pricing than during 2017 based on market strength in our larger and higher quality items.” Concerning the 7% decline in prices achieved in comparison to the second quarter, the miner says it reflects a market price correction since July in smaller and lower quality items attributed to challenging trading conditions in India. "Weaker pricing in the cheaper items is expected to continue through the remainder of 2018," they add.