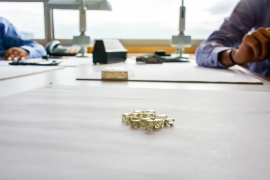 The polished-diamond trade in Antwerp during September again witnessed a surging average price per carat, particularly for imports (+22%), however, the trading center remained quiet after the traditionally slow summer holiday, as a result of which the volume of goods traded declined notably. Some have attributed the September slowdown to the Jewish holiday period, while others tell us that Indian companies are still hesitant to acquire smaller goods, with many having already purchased what they need for the upcoming Diwali holidays. Reports from the Hong Kong trade fair were also less than encouraging and the twin typhoons - Mangkhut and US-China trade tensions - may have had a negative impact. Despite the recent downturn in the volume of diamond imports and exports, over the first three quarters of the year thus far (Jan.-Sept.), the overall value of goods traded in Antwerp - polished as well as rough - has risen by a low to mid single-digit percentage. The rough diamond trade has been impacted particularly by the global downturn in the trade of smaller, less-expensive goods.

According to figures from the Antwerp World Diamond Centre, the volume of Antwerp’s polished-diamond exports during the month of September declined by 7% on a year-over-year basis, causing the value of those goods to decline by only 2% as the average price per carat rose by 5% to an all-time high of $2,726 per carat. Meanwhile, the volume of polished-diamond imports fell by 15%, yet the decline had no impact on the value of polished goods traded due to a sharp rise (22%) in the average price per carat, an unprecedented $2,542 per carat. Since January, polished-diamond imports have risen by 3% in volume and 5% in value to $9 billion, as prices have risen by 3% overall to about $2,010 per carat. Polished exports have fallen by 3% in volume this year, but the overall value of the polished trade has risen by 2% to $8.8 billion as the average price per polished carat has gained 5% to approximately $2,450 per carat.

The rough-diamond trade in September failed to awaken from its end-of-summer slumber, as the volume of imports as well as exports tumbled by over 20% year-over-year. Imports of rough diamonds fell 23% in volume compared to September 2017, resulting in a 13% decline in the value of those imports despite an 8% rise in the average price per carat, ending at a robust $126 per carat. The volume of rough exports fell 21%, causing a 13% downturn in value, which was mitigated by an 11% increase (y-o-y) in the average price at $114 per carat. These figures indicate that the volume of smaller and cheaper rough goods being imported and exported continues to decline amid growing uncertainty about that category of goods across the industry globally. India, the main market for smaller goods, has seen its rough diamond imports decline, fuelled by banks squeezing manufacturer's access to financing as well as a steady increase in rough diamond prices.

The fact that that the value of Antwerp's rough trade for the year thus far is still higher than last year despite a decline in the volume of goods traded indicates that Antwerp's trade of higher-quality goods has remained robust while the appetite for lower-priced goods has waned. For the first nine months of the year, Antwerp’s rough diamond imports have now declined by 3% to 68 million carats while the value of those imports has risen about 3% to $8.3 billion, due to a 6% increase in the price per carat of rough imports. The volume of rough exports from the diamond capital are now down by 4% at 90.6 million carats, while their value has increased by over 3% to $9.6 billion, with the average price having risen by 8%.