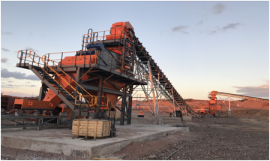 Zimbabwe's Consolidated Diamond Company (ZCDC), the state-run entity overseeing the country's diamond mining and marketing operations, has announced it will introduce an electronic trading system to improve efficiency in line with international best practice. The online system will allow for the participation of international buyers who cannot physically attend an auction, as well as "do away with the excessive human interface which breeds corruption," writes The Herald. Zimbabwe’s second diamond tender of 2018 earned $28.3 million from 423,066 carats, even though the tender attracted fewer international buyers than expected.

Speaking at the launch of the electronic trading system, which the ZCDC developed and made available to the Minerals Marketing Corporation of Zimbabwe (MMCZ), Mines and Mining Development Minister Winston Chitando said the system was a big step towards getting real value for Zimbabwean diamonds. "It is absolutely important that the country gets the requisite value from the sale of those diamonds," he said, pointing to the need for proper cleaning, sorting and processing of the diamonds after the product has been mined. This includes the efficient handling and management of that whole process, as well as the selling, bidding and invoicing processes. "Certainly, the manual system which we had been using was without a doubt in need of urgent replacement, and replaced it was," he said.

ZCDC temporarily exited the international diamond market in April 2017 and stockpiled goods as it sought to address shortcomings that resulted in failure to recoup real value from their diamonds. The state firm returned in 2018 with test sales to assess the market and realized that an online auction system was the solution to most of the challenges that dogged the previous auction. ZCDC CEO Dr. Moris Mpofu says, "Among the key learning points noted from the first two tenders was the need for an electronic diamond trading system to improve efficiency." The diamond sector is expected to play a key role in the mining industry's role in the attainment of vision 2030 by which President Mnangagwa has said the country should achieve upper middle-income status. ZCDC has set an annual production of at least 10 million carats by 2023, up from 0.9 million carats in 2016 and then 1.8 million in 2017. The country is currently on course to meet its 3 million carat target for 2018.