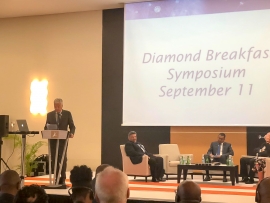 Representatives from the Antwerp World Diamond Centre (AWDC) this morning joined Belgium’s Deputy Prime Minister and Minister of Foreign Affairs and European Affairs, Didier Reynders in Angola, where he hosted a Diamond Breakfast Symposium in cooperation with the Ambassador of the Kingdom of Belgium to Angola, HE Frank Felix. The mission to Angola is intended to reinforce the momentum established between the two countries during the visit of the President of Angola, João Lourenço, to Antwerp last June, where they discussed increased cooperation concerning diamond trading. The Antwerp delegation included Nishit Parikh, President of the AWDC Board of Directors and Karla Basselier, AWDC’s Chief Officer Public Affairs, while Angola was represented by its Minister of Mineral Resources and Petroleum, Diamantino Pedro Azevedo. Angola is the world’s fifth-largest producer of diamonds, with annual production at 9 million carats and growing.

The change of power in Angola marked by the election of President Lourenço has had an impact on the diamond industry in the country. As early as his inauguration ceremony, President Lourenço emphasised that the commercialisation of the Angolan diamond production is a priority and reform of Angola’s diamond industry is needed to increase production and improve returns as Africa’s second largest oil producer looks to diversify its economy. After appointing Mr. Azevedo as his new Minister of Mineral Resources and Petroleum, he changed the leadership of national diamond companies Endiama (diamond exploration, mining and licensing) and Sodiam (diamond purchasing, sales, trade management and marketing). His first stop on his road to find new partners was Antwerp, where last June he said, “We are going to be represented in Antwerp, and will work together in partnership.”

Speaking at the Breakfast Symposium, President of AWDC Parikh emphasized the leadership role that Antwerp has assumed in the diamond industry, giving an overview of the Antwerp market and pointing out the benefits of Angola exporting more of its local diamond production directly to Antwerp. “84% of all rough diamonds pass through Antwerp at some point along their journey, making Antwerp by far the largest trading center in the world,” said Parikh. “Antwerp’s high level of expertise, wide range of diamond services, and the most extensive diamond tendering system in the world create higher prices for rough diamonds than any other trading center in the world. But not only the market environment is important. Thanks to the excellent collaboration between the government and the industry, our city is internationally recognized as the ethical benchmark and role model for the entire diamond and jewelry industry." He concluded in saying, “These, my friends, are the building blocks for a true and mutually beneficial partnership.”

The AWDC also travelled to Angola to enlist the country’s support for a second African Diamond Conference. In November 2017, the AWDC, with the support of the Belgian Federal Public Service Foreign Affairs, organized its first African Diamond Conference. The maiden edition welcomed more than 330 attendees from all corners of the diamond industry and diplomatic corps, including 9 African Mining Ministers and the former President of South Africa, Mr. Thabo Mbeki. The conference served as a starting point for intensified dialogue between the European diamond industry and the community of African diamond producing countries, and sought to continue the direct dialogue with African diamond-producing countries regarding good governance of natural resources. The AWDC has made an initial proposal for the outline of a second African Diamond Conference to be organised on the African continent in the fall of 2019.