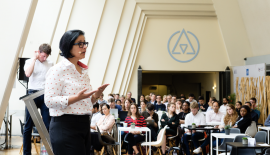 Last week, the Antwerp World Diamond Centre (AWDC) and the University of Antwerp hosted an “Innovation and Diamonds” conference at the Antwerpsche Diamantkring - the only rough diamond bourse in the world - featuring internationally-recognized experts from across the spectrum of the diamond trade, including alternative financing, the impact of digital on the luxury segment, the feasibility of small-scale ethical mining, as well as the earthquake and aftershocks of De Beers’ foray into lab-grown diamonds: LightBox. The Innovation and Diamonds conference, which took place in the framework of the Antwerp Summer University program dedicated to the diamond industry, featured six keynote speakers and dedicated workshops addressing the latest trends and emerging innovations in the trade. Most of the presentations are available on the Antwerp Summer University page of AWDC's website.

The U. Antwerp and the AWDC, together with the Belgian Federation of Diamond Bourses organized their second two-week summer school program - "From Mine to Finger: A deep dive into the world of Diamonds". The first week of the program provided its 27 participants - including students and young professionals from four continents - with an introduction to the historical, geological, technical, economic, commercial and ethical perspectives of the global diamond trade. The second week consisted of the keynote sessions and practice-oriented workshops, where the students received hands-on guidance in rough diamond sorting, polished grading and polishing. At the conclusion of the two weeks, the students successfully presented their thesis projects to a jury of U. of Antwerp professors and diamond indsutry specialists.

AWDC CEO Ari Epstein opened the keynote sessions, commenting, "It is one thing to say that Antwerp is the leading diamond trade center, not just for business, but also in terms of openness and intellectual leadership. It is another thing entirely to put that claim into practice. This program is about walking the talk. If we do not reach out to the younger generation, the leaders of the future, we run the risk of losing those very qualities that set Antwerp apart. We need young people not only to join the trade, but to think about it, and to think about where it is heading. Change is coming, and we need people that are ready to deal with it."

Kicking off the week of keynote sessions was industry veteran-turned consultant and analsyt Ben Janowski, whose presentation, "Diamond Revolution: Are Man-made Diamonds a Threat or a Boon to the Industry’s Future?" took an in-depth look at disruptive changes to the US retail market, particularly for jewelry. From Pandora selling $24 rings and not discounting them as engagement-class, to Costco selling high-end diamond jewelry and now De Beers launching Lightbox, diamond retail is in transition, and retailers are advised to know their customers and how to reach them. The new consumer is part of the "gig economy" in which workers are hired for a short-term job and then move on, eroding the traditional workforce. In this environment, technological efficiciency and DTC (direct to consumer) delivery mechanisms are key. He argued that De Beers knows its future customers very well, and that Lightbox will fully confirm the legitimacy of man-made diamonds; he is not buying the party line that they view Lightbox as a minor product, but fits seamlessly into a long-term plan.

Next up, Chaim Even-Zohar zoomed in specifically on De Beers' decision to enter the synthetic diamond jewelry arena with his lecture, "Lightbox and the Transformation of the Diamond Value Chain: Industry Economics Have Changed Forever". He as well emphasized the credibility Lightbox gives to the lab-grown segment, and estimates that some 30%-40% of the polished market is likely to be affected in the next few years. Clearly then, he believes De Beers disruption of the market will lead to losses in the natural diamond business, and will have a greater impact on ALROSA than anyone else. Demonstrating that the volumes of synthetic being produced are much higher than many suspect, he argues they in particular their smaller iterations will have a major impact, as 80% of all polished carats are currently under 18 pts. Eventually, he argues, the distinction between lab-grown and natural diamonds could fade as supplies become mixed, though he stopped short of proclaiming the death of natural as a desired segment of the overall market.

The second day of the conference featured Dr. Sarah Steenhaut, Professor of Digital Marketing at Ghent University and founder of brand consultancy bureau Callebaut Collective, who took a fresh look at how digital is impacting industries, consumers and consumer expectations, and the role of digital marketing in today’s world, drawing conclusions about what all this means for the luxury segment. In her presentation, "Digital Is Eating The Luxury Segment Too", she argued that in order for brands to tailor their approach to customer experience - whether by offering convenience, personalization, interaction or saving time - they must first understand their customers: how to reach them and how to retain them. It is important for marketers to evaluate not how customers are purchasing a brand, but how they are using it. She notes that although most companies generate less than 5% of their sales online, digital marketing is a disruptive force having a profound impact in transforming business models. Still, she argues that a brand's success is not about doing ‘digital marketing’; it is about marketing effectively in a digital world. And this means, as she encouraged her listeners, that one must embrace the chaos.

Day three featured Marie d'Huart, founder of CAP Conseil, a sustainability and social responsibility consultancy, and an expert, professor and auditor in ethical, social and environmental standards with a focus on responsible supply chains. In 2016, she co-founded CAP Source, creator of the My Fair Diamond brand, which has created a jewelry brand using ethical artisanal diamonds and gold, traceable from mine to finger. Speaking from first-hand experience, she addressed the many challenges of creating such an ethical diamond brand from artisanal mines, including those of an ethical, technical and economic nature. Taking the issue of fair pricing for rough diamonds, she discussed the fact that sustainable luxury carries additional costs, from paying decent wages to using fair-mined gold and conducting third-party audits. Fortunately, their research shows that 75% of consumers are willing to pay more for ethical diamond jewelry. She also examined what constitutes ‘ethical’ diamonds, which in her view goes far beyond the Kimberley Process' negative 'no blood' standard to include positive contributions to communities in keeping with UN's Sustainable Development Goals.

The final day of the Antwerp Summer University "Diamonds and Innovation" keynote series featured Varda Shine, former CEO of the De Beers Diamond Trading Company (DTC) from 2006 until 2014 and currently an advisor and Vice Chairman at Channel Capital Advisors and member of the Advisory Board at Sarine Technologies, and Michaël Geelhand de Merxem, Project Manager for Banking Relations at the AWDC. He got the day rolling by focusing specifically on financing and alternative financing from an Antwerp perspective, noting that a majority of Antwerp trading companies had not yet considered alternative financing, but 84% said in a survey that they would be able to improve his margin with additional financing. The effects of the most recent economic crisis sparked a wide range of regulations that have had a direct impact on financing in the diamond industry, and creative solutions are needed to find long-term and stable additions to traditional banks.

Varda Shine then assumed the perspective of an alternative financer, offering insight into how a provider of alternative financing views the diamond midstream, discussing the qualities and requirements that midstream companies need to have to be attractive to alternative financers and explaining what midstream companies should do to become more attractive to alternative financers. She pointed out that throughout the 20th century, De Beers' stockpile played a major role in supporting the midstream finance requirements, but De Beers business model changed, the stockpile was sold down between 2000-2004, and the finance burden moved to the midstream. This has created multiple challenges, as banks have place much higher requirements on businesses applying for financing, and tinancing activity by traditional banks to the midstream diamond industry has been declining in the past few years. She then identified several diamond industry participants have launched initiatives to address the dearth of credit to the industry, including her own London-based Channel Capital Advisors LLP, and then discussed in greater depth the idea of securitasation of receivables and diamond inventory, whereby various types of assets and/or debt are sold to a special purpose entity (SPE). As a result of selling their trade receivables and/or diamond inventories to SPEs, diamond traders and manufacturers have been able to access new sources of financing (see presentation via link for details).