Sales at Botswana's Okavango Diamond Company Down 16% in H1 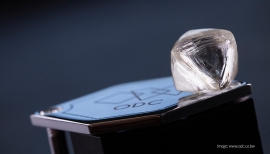 Sales at Botswana's state-owned Okavango Diamond Company (ODC) fell by 16 percent in the first half of 2018 to $260 million, said managing director Marcus ter Haar, citing a high comparison base against last year's record growth, as Reuters reports. The company sold 1.778 million carats in the first half of 2018 compared with 1.808 million carats in the same period last year.

"A favorable rough diamond market over this period has meant ODC has generated healthy sales for the first half of 2018 despite not being able to offer larger volumes to our customers compared to the same period in 2017," Ter Haar said, adding that customers from the United States and the Far East largely drove demand in the six months through June. Looking ahead, he said sales for the remainder of 2018 were unlikely to be as strong as in the first half due to an anticipated cyclical downturn in the market. "Current indications suggest that a seasonal slowdown in the diamond market has now begun which will have somewhat of a dampening effect on the promising first half," he said.

While sales were down, Debswana, a joint venture between Anglo American's De Beers and Botswana, recorded a 9 percent jump in production in the first half of 2018 to 12.08 million carats. Botswana’s rough diamond exports fell by 2.5 percent to $1.67 billion in the first half of 2018, according to data released by the country’s central bank. The figures refer to goods that Debswana produced and sold to De Beers global sightholder sales and Okavango Diamond Company. The Bank of Botswana reports that exports also dropped 6 percent year-on-year to $758.1 million in the second quarter. The shipment of the stones registered a 0.3 percent growth in the first quarter to $915.5 million, said the Bank of Botswana.

ODC is a rough diamond marketing company that is wholly owned by the Botswana Government, with access to 15% of Debswana's run-of-mine production.