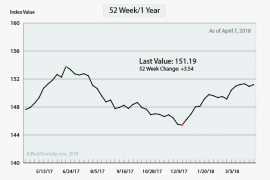 Although the sales figures have yet to arrive, and the prices are not made public, Bloomberg's Thomas Biesheuvel has it from "people familiar with the matter" that De Beers has raised its rough diamond prices for the second consecutive cycle. He writes, "De Beers lifted prices between 1 percent and 2 percent, according to the people, who asked not to be identified as the information isn’t public. The company raised prices a similar amount in its previous sale at the end of February. While the sale is ongoing, the total amount sold is likely to be around $525 million, the people said." This assessment appears to be borne out from results as well as analysis around the rough diamond trade. Paul Zimnisky, who maintains the Zimnisky Global Rough Diamond Price Index, for instance, notes in his State of the Diamond Market newsletter that rough diamond prices are up approximately 2% year-to-date in 2018, even though he expects the impact from the alleged Modi/Choksi banking fraud crisis, which restricted financing availability to small- and medium-sized diamond manufacturers in India, to eventually impact demand for lower-quality rough in the short-to-medium term.

According to figures from the Antwerp World Diamond Centre, the average price of imports of rough diamonds to Antwerp has risen by 10% in the first three months of 2018, to $120 per carat from $109 per carat. ALROSA sold $560 million of diamonds in its March sale, saying that, “In January-March, world markets saw higher demand for medium and large-size rough diamonds compared to the same period last year", while Canada's Stornoway Diamonds has seen its average price per carat rise from $86 to $112, though they attribute the major increase to an improved product mix and the sale of a 37-carat Type IIa, D color, internally flawless stone that sold for US$1.3 million (US$36,000 per carat), the highest price achieved for an individual stone from the Renard Diamond Mine to date. Biesheuvel also notes that De Beers Chief Executive Officer Bruce Cleaver hinted in February that there could be scope for price rises this year.