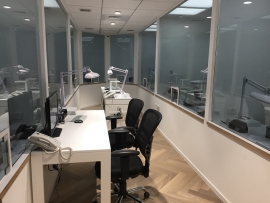 The Israel Diamond Exchange (IDE) launched the International Tender Center (ITC) in February last year to attract major diamond producers and trading companies to the market and make goods available to bourse members. According to the organization, the ITC "has succeeded beyond expectations during its first year of activity." So much so, the bourse has announced that the center will be expanded later this year to encompass a venue for live auctions. The ITC, a state-of-the-art facility located within the secure premises of the Israel Diamond Exchange, hosted 20 week-long tenders of rough and polished diamonds during its first year, featuring major diamond producers and brokers such as Gem Diamonds, Rio Tinto, Dominion Diamond Corp., I. Hennig and Koin International, most of whom had never before tendered goods in Israel.

The organization says the companies that participated during the first year have made reservations for the coming year, and additional companies are in negotiations. “We established ITC in order to meet the large demand for rough diamonds by our members, who previously had to travel abroad to take part in tenders," said Israel Diamond Exchange President Yoram Dvash. "By opening the Tender Center we were able to save them considerable time and money, as well as to offer additional companies the possibility of taking part in these direct sales.” Zvi Zamir, Chairman of ITC and IDE’s Rough Diamond Committee, said he expects additional important diamond suppliers to soon offer their goods at ITC.