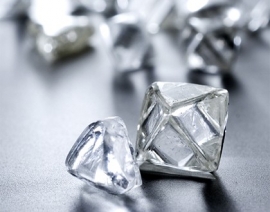 Russian diamond mining giant ALROSA sold $532.8 million worth of rough diamonds in February, as market damand for rough stones remains robust, driven by manufacturer restocking and strong jewelry sales in China leading up to the Chinese New Year. Rough sales for the month represented a 37% increase over the same month a year ago, and follows a strong initial sale of the year where they sold $499 million. The $1.03 billion in sales for the first two months of 2018 marks a 34% rise over the $748 million moved in 2017.

With polished diamond sales at $9.1 million in February, a $3 million decline from the year before, ALROSA Group sold a total of $541.9 million worth of diamonds for the second month of the year. Together with De Beers ($555 million), the two leading diamond companies supplied $1.09 billion in rough production to the market last month, and have sold over $2.25 billion so far in 2018.

“In February, the core diamond markets were quite strong," said ALROSA Deputy CEO Yury Okoemov. "The diamond cutting sector continues replenishing the stock. Demand for diamond products was also backed up by good jewelry sales in China on the eve of the Chinese New Year. Prices for diamonds in most size categories grew in January-February,”