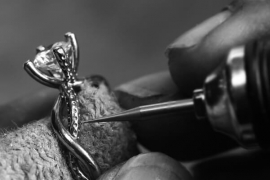 With the country’s leading public sector banks facing massive financial turmoil following the fraud cases featuring billionaire Nirav Modi and Mehul Choksi, now estimated to involve approximately $2 billion, diamond mining companies may ultimately pay the price as far as sale of rough diamonds to Indian diamond companies is concerned, suggests The Times of India. The TOI turned to independent diamond analyst Paul Zimnisky for insight: “There are two primary concerns as a result of the Modi and Choksi episode. One that this will further startle the already fragile sentiment of lenders and investors to the industry, which will ultimately pressure demand for rough and wholesale polished; and two is that it will diminish end-consumer demand for diamond jewelry due to consequential perception and tarnished confidence in purchasing the product. The latter is more specific to domestic consumers in India, and this is a longer term implication.”

Zimnisky added, “If this situation is relatively contained to Modi’s portfolio and Gitanjali, the longer term outcome could have some positive longer-term consequences as well, as lenders to the industry will inevitably become more selective, which should rein in some excess speculation and leverage in the industry, which had arguably hurt manufacturing margins in recent years.” The TOI points out that the leading diamond mining companies do not offer any credit to diamond companies when it comes to selling their rough diamonds. Rather, diamond companies have to take a letter of undertaking (LOU) and letter of comfort (LOC) to pay against the stocks purchased. Diamond industry analyst Aniruddha Lidbide said, “The Nirav Modi and Mehul Choksi’s multi-crore bank scam is going to squeeze bank credit in the diamond industry, resulting in more financial trouble and operating difficulties for the companies. The LOUs and LOCs are must for purchasing high-value rough diamonds. If the banks have decided to stop issuing fresh LOCs and LOUs, the going will get tough for the diamond companies.”

The news site adds that the Bank of Baroda, which is among the leading banks financing the diamond industry, recently instructed all its branches across the country to not issue LOUs and LOCs in favour of overseas supplier, bank or financial institution on behalf of the customers for trade credit effective February 20.

As reported here yesterday, Nirav Modi's Firestar Diamond filed for bankruptcy in a New York court. This bankruptcy filing includes Firestar’s A.Jaffe Inc. wedding jewelry affiliate and its Fantasy Inc. affiliate, and estimates the numbers of creditors at between 50 to 99. A.Jaffe, a New York-based bridal-jewelry manufacturer, plans to restructure under Chapter 11 to preserve its operations and keep a clear separation between it and the allegations against Modi. The events in India “will in no way harm [our] brand commercially,” the company stressed in a statement Monday. “A.Jaffe and its core team here in the US want to assure partners and customers that A.Jaffe is not in any way involved with any of the alleged conduct that is the subject of the accusations,” the company said. The company’s liabilities are between $10 million and $50 million, according to the Chapter 11 filing it submitted the same day. Firestar and Fantasy, which both manufacture jewelry, filed for Chapter 11 protection to ensure stability of their operations and find a buyer quickly, they explained in a statement Tuesday. The companies expect to agree on a sale to one or more companies in the next week.