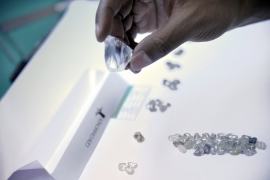 Gem Diamonds, the London-based miner operating the Letšeng mine in Lesotho, recovered more carats, more large diamonds and sold them at a higher price in 2017 than in 2016, the company announced in their Q4 2017 Trading Update. They have also started 2018 on a roll, announcing on 15 January 2018 the landmark recovery of an exceptional quality 910 carat, D Colour Type IIa diamond - the largest diamond to be mined to date at Letšeng and also believed to be the fifth largest gem quality diamond ever recovered. Also in January, post-period end, they recovered four diamonds greater than 100 carats, weighing 149.43, 117.67, 116.98 and 110.63 carats, as well as a high quality 8.53 carat pink diamond.

Gem Diamonds’ CEO, Clifford Elphick commented: “The recovery of the 910 carat diamond is a landmark for all of Gem Diamonds’ stakeholders, including our employees, shareholders and the Government of Lesotho, our partner in the Letšeng mine. It is also encouraging to see that the improvement in the recovery of greater than 100 carat diamonds is continuing into 2018, with five greater than 100 carat diamonds recovered in the first month of 2018. This is largely attributable to the ongoing technical improvements made at the Letšeng mine. It is also pleasing to see carats sold during the Period up by 21% over the previous period. The market for Letšeng’s high-quality diamonds remained robust over the Period, achieving an average price of US$ 2 217 per carat, up 19% from the previous quarter. Significant progress has also been made on the business efficiency and optimisation programme. Further details will be released in the Full Year 2017 results on 14 March 2018.”

Other significant figures include: At the end of the Period, the Group had a net cash position of US$1.4 million, a $13.2 million improvement from the Q3 2017 net debt position of US$11.8 million. They note that strong demand for Letšeng’s large high-quality white rough diamonds has continued, as evidenced by the average price achieved per carat during the period, resulting in an average price of US$1,930 per carat for 2017. Letšeng treated a total of 1.3 million tons of ore during the period, 54% of which was sourced from the Main pipe, and 46% from the Satellite pipe. The full year contribution from Satellite pipe was 2.1 million tons. The balance of the ore (0.3 million tons) was treated through the Alluvial Ventures contractor plant, and was sourced from the Main pipe. The reduced feed rate into Plant 2 due to the crack in the scrubber shell continues. The installation of a new scrubber shell is planned for April 2018 where after the feed rate will revert to normal levels. For the full year, the company treated 6.44 million tons, marginally below guidance of 6.5 million tons due to the reduced feed rate.