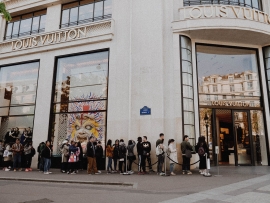 Although the pandemic has continued to dominate headlines, a year after the outbreak in the US and Europe, an Israeli study has underscored the effectiveness of the vaccine in preventing infection. This, along with news of the Biden administration accelerating the vaccine rollout in the US, and the UK’s successful vaccination program, has given consumers hope that there is light at the end of the tunnel.

Earlier this month Bloomberg reported that consumers had saved 2.9 trillion USD during the pandemic. Of this, 1.5 trillion is from the US alone. Experts believe that the lockdown barriers to spending, as well as the stimulus, boosted incomes have left consumers with pent-up savings. As soon as the restrictions ease, we will likely see “revenge spending”.

Revenge spending is when consumers are shopping starved during their quarantine and then overcompensate by splurging more than usual when they are able to again.

Luxury houses have felt the positive impact the vaccine has sparked as revenue continues to rise. The Business of Fashion (BOF) reported that Hermès and Moncler’s quarterly results swiftly moved to a familiar pattern, with revenues soaring in China. Moncler notably pointed to triple-digit revenue growth in February, driven by holiday spending for the Lunar New Year. Meanwhile, Hermès saw revenue in Asia grow by nearly 50% in the last quarter of 2020. Full-year revenues dropped by 6% at Hermès and 11% at Moncler, versus Bain & Company’s estimated industry-wide contraction of 23%.

L Catterton, the LVMH-backed fund, had a bustling February as they acquired a majority stake in Birkenstock, and injected $115 million into Savage x Fenty, Rihanna’s lingerie brand. Additionally, LVMH struck a deal with Jay-Z to acquire a 50% stake in his Armand de Brignac – Ace of Spades - champagne brand, but agreed to put its fashion venture with Rihanna on hold “pending better conditions.”

This week another story made headlines when the Agnelli family – best known for being the largest investors in Ferrari - acquired a 24% stake worth 643 million USD in Christian Louboutin, the French luxury shoe and bag maker. In December the Agnelli’s invested 95 million USD for controlling stakes in Shang Xia Paris, a Chinese luxury business founded by French luxury giant Hermès and Chinese designer Jiang Qiong Er.

The spending of the rich will shift dramatically in the next year or two, Bain reported. Instead of splurging on experiences, which dominated luxury spending over the past decade and fueled much of its growth, the rich will focus their spending on physical products. Analysts believe it will take at least a year or two before the affluent will want to return to crowded planes, restaurants, and resorts.

Source: Reuters Data as at 26 February 2021
Read The Full Release