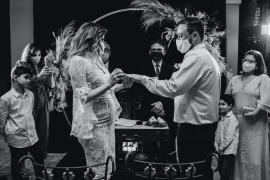 While the pandemic has led to a flurry of engagements, the $73 billion wedding industry has had a considerable shake-up. With wedding plans abruptly being upended, many couples have had to make some tough choices. According to an article published in The Washington Post, couples are considering having a smaller wedding now – with guests attending either in-person or virtually-, postponing to a later date or canceling the plans altogether.

“Most couples - about 80 percent - postponed or canceled their ceremonies after the outbreak began nearly a year ago”, said David Wood, president of the Association of Bridal Consultants. “Those who haven’t are scaling back considerably, with backyard vows and online ceremonies to avoid large gatherings,” Wood said.

According to the Wedding Report, a market research firm, the average wedding in 2019 cost nearly $25,000. With all the restrictions in place, the nuptials are increasingly taking place outdoors or online, allowing couples to save on hall rental fees. That’s not to say these couples are not still spending, they are now splurging on engagement rings, bridal jewelry, and flowers, moving away from multicourse dinners, traditional venues, and tiered cakes.

At De Beers, fourth-quarter sales of engagement rings rose 12 percent y-o-y, with much of that growth coming from larger stones, according to Stephen Lussier, the company’s executive vice president of consumer markets. Other jewelers are reporting similar trends, including an uptick in diamond-encrusted wedding bands for men. Signet Jewelers, the parent company of Kay and Zales, reported seeing higher demand for bigger and more fancy shaped diamonds, including pear- and heart-shaped stones for both men and women, according to President Jamie Singleton. “The ring is more important than ever,” she said. “As couples have smaller weddings or postpone them, they’re putting a little more of their budget in rings.”

“As couples have smaller weddings or postpone them, they’re putting a little more of their budget in rings,” said Jamie Singleton, President Signet Jewelers