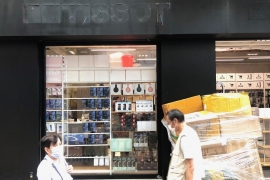 Beleaguered by the unprecendented challenges now dragging on for nearly a year, luxury brands have started throwing in the proverbial towel on their Russel Street shops in Hong Kong’s bustling Causeway Bay, considered the world’s most expensive shopping street. "Already struggling for survival after months of civil unrest crippled Hong Kong’s economy," writes Pearl Liu for the South China Morning Post, "the final blow for many came this year with the coronavirus pandemic, which killed off any remaining consumer sentiment."

Liu illustrates the exodus with the example of a shop that used to house the Swiss watch maker Tissot (pictured), which is now home to a mobile phone accessories vendor that sells items such as phone charging wires and plastic bathroom hooks for as little as HK$1. The new occupant, which secured a six-month lease, is paying just 6 percent (HK$100,000 per month) of what its predecessor Tissot was paying in monthly rent: HK$1.43 million, according to agents and Land Registry documents. "The amount of empty retail space on the glitzy boulevard doubled during the first three months of this year as a succession of international brands decided enough was enough."

“It is hard to keep these retailers, particularly those focusing on tourists’ business, from shrugging off generous rental concessions," said Oliver Tong, head of retail at property services firm JLL in Hong Kong. "It is a fact, although brutal, that tourists will not be coming back soon, and everybody knows it. And it is also difficult to find new takers as no one dares to expand at this moment.” The 250-metre long street that used to be lined with upmarket brands was a microcosm of Hong Kong’s once robust luxury retail industry, Liu writes, but it has suddenly lost its appeal. “Landlords and retailers have to adjust to the fact that in the next two to three years, the 7 million locals are their major target,” said JLL’s Tong, suggesting that the street will shift from catering for tourist consumption to trying to capture local spending.