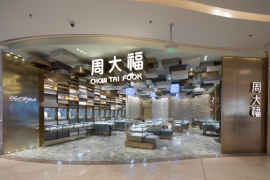 Following the temporary closure of their stores in 'affected regions' of mainland China, Chow Tai Fook Jewellery Group has temporarily closed around 40 stores in Hong Kong and Macao in response to the coronavirus (COVID-19 or nCoV2019 (2019 novel coronavirus)) epidemic, a spokesperson said Monday. The Hong Kong-based jewelry chain operator also will shorten operating hours at its remaining stores in the two cities. These shops will close by 7 p.m. local time until further notice.

"At this stage, the group does not have a plan to lay off staff," the spokesperson said. Instead, the company will "arrange for front-line staff to take their annual leave or work in other stores." Chow Tai Fook, one of the world's largest jewelry retailers, operates 91 stores in Hong Kong and 18 in Macao, as of December 31. The company also has more than 3,600 points of sale in mainland China. All of the company's points of sale in the "affected regions" of mainland China have "already responded to the calls of local governments or shopping malls to suspend their operations temporarily," the spokesperson said. These locations total about 80% of Chow Tai Fook's mainland stores. The majority of the other mainland locations have reduced their operating hours, the spokesperson said.

Chow Tai Fook said last month that it planned to close as many as 15 stores in Hong Kong from among those with leases due to expire in the next financial year starting April 1. This follows the anti-government protests that began in June, which cut the number of mainland tourists on which the Hong Kong shops heavily depend for sales. The jeweler's temporary shutdown of stores in Hong Kong and Macao comes as the virus outbreak slams Hong Kong's economy by further weakening inbound tourism.