Hong Kong's Jewelry Sales Plummet in 2019, No End in Sight 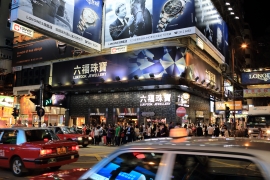 Hong Kong's retail sales of jewelry and luxury items limped to the end an abysmal 2019, with December 2019 sales falling nearly 37% short of December 2018 earnings, as the region closed the year more than 22% lower than the year prior. The impact of months of social unrest has been widely documented, as it crippled consumer sentiment and kept tourists away from the commercial hub.

A government spokesman said that retail sales, which plummeted during the quarter - but actually started its downward slide in June, when the protests began, before experiencing a massive fall in August - continued to decline sharply in December 2019, as the impact of the local social incidents on consumption- and tourism-related activities remained severe. For the fourth quarter of 2019 as a whole, the volume of retail sales fell by 24.1% year-on-year, representing the largest quarterly decline on record.

According to statistics released by the government's Census and Statistics Department (C&SD), in December 2019, sales in category 'jewelry, watches and clocks, and valuable gifts' decreased 36.7% to HK$5.22 billion (US$672 million). For the year as a whole, the luxury category fell 22% to HK$66.2 billion (US$8.53 billion).  The jewelry and luxury goods category experienced the sharpest decline among all the categories, not only for December but for the full year as well. Overall, December retail sales declined 19% to HK$36.19 billion (US$4.66 billion) while retail sales for the year fell 11% to HK$431.17 billion (US$55.5 billion).

January was the only month in which retail sales of jewelry and luxury items booked a year-over-year gain, increasing 4%. This was followed by 11 straight months of decline. The real trouble started in June, when retail sales fell 17%, but the decline quickly accelerated, reaching a nadir of -47% in August. Not only have the Hong Kong protests not subsided, as protesters disturbed Christmas in the city and continued into the new year, but now the coronavirus has arrived to keep the situation grim. The government spokesman pointed out that the business environment for retail trade "has become even more difficult recently, with the threat of the novel coronavirus infection heavily weighing on inbound tourism and local consumption sentiment." He added that "The near-term outlook for retail sales depends critically on how the situation of the novel coronavirus infection will evolve."