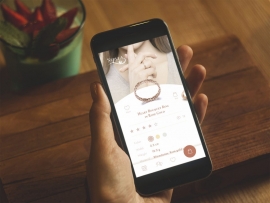 Jewelry sales during the U.S. holiday season showed a modest increased compared to 2018, with higher-end independent jewelers performing particularly well, according to several surveys. Online buying surged, while foot traffic in retail stores slowed. The Mastercard SpendingPulse report shows that the jewelry sector experienced 1.8 percent growth in total retail sales, with online sales growing 8.8 percent – supporting eCommerce strength. They add that "This trend started before the holiday season and helped the sector power through to its finish," while Steve Sadove, senior advisor for Mastercard and former CEO and Chairman of Saks Incorporated notes that “E-commerce sales hit a record high this year with more people doing their holiday shopping online."

Signet Group, which includes Kay Jewelers, Zales and Jared, and is the largest jewelry retailer in North America, yesterday released its sales results for the nine-week period ended Jan. 4, reporting that total same-store sales grew by 1.6%, with comps in North America rising a full 2 percent. TTotal sales for the holiday period were $1.8 billion, with online sales driving the  increase, rising 13.5% year-over-year to $252.3 million while comps at Signet’s brick-and-mortar stores in the U.K. and North America were essentially flat at 0.2% growth. In North America alone, same store sales increased 2.0%, astansactions grew in the holiday season and average transaction value was flat. eCommerce sales grew 13.3% and brick and mortar sales grew 0.4% on a same store sales basis.

Virginia C. Drosos, Chief Executive Officer, commented, “We delivered holiday same store sales growth ahead of our guidance as we continued to implement year two of our Path to Brilliance transformation. Product newness, investments in our digital capabilities, and more targeted marketing campaigns drove both eCommerce and brick and mortar growth in North America." Meanwhile Preliminary results from Tiffany & Co., which reported sales declines in each of the past three quarters, rebounded to show a 2% to 4% holiday sales increase in North America and 1% to 3% worldwide ‒ with a steep drop occurring in Japan.

According to Russel Shor of the GIA, "Independent jewelers in the U.S. turned in one of their best years ever, according to a recent survey in The Centurion newsletter. It found that 81% of jewelers saw increases, with more than half of that group posting hikes of 6% or more. Only 7.1% of those surveyed said they saw real declines in business and the remainder stayed even. A mid-season survey found a much higher percentage running behind last year, but a flurry of final-week business pushed most of them into positive territory." He notes that some retail analysts attributed the sharp decline in foot traffic in 2019 year to an uncharacteristically short shopping period between Thanksgiving and Christmas, which shifted more business to the internet. “Due to a later-than-usual Thanksgiving holiday, we saw retailers offering omnichannel sales earlier in the season, meeting consumers’ demand for the best deals across all channels and devices,” said Steve Sadove, senior adviser for MasterCard, in a press statement.