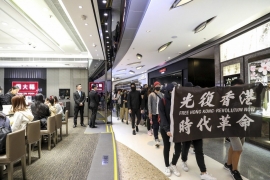 Chow Tai Fook, Hong Kong's leading diamond-jewelry retailer and the second largest jeweler in the world by market value after Tiffany & Co., intends to about 15 of its 86 stores in Hong Kong as anti-China protests in the city weigh on the retail market and deter tourists, according to multiple media outlets. Indications that it rather intends to focus on growing its presence in the mainland China market suggests the slump in retail sales is not about the reverse soon.

The leases on approximately 40 stores will expire in the financial year that runs from April 2020 to March 2021, and the company plans to shut "about mid-teens of those," it said in an emailed response to Bloomberg on Tuesday (Jan 14). The closures will mainly be located in tourist districts such as Causeway Bay, Mong Kok and Tsim Sha Tsui. The second-largest jeweler in the world by market cap currently has 86 retail outlets in Hong Kong, according to its website. The jeweler said it expects "macro headwinds" to continue to have an impact in the next six to 12 months. On Friday, the retailer reported that same-store sales in Hong Kong and Macau for the three months ended in December fell 35% from a year earlier.

The decision underscores the grim outlook for Hong Kong’s retail industry, even as seven months of anti-government protests have subsided in recent weeks. Retail sales slumped 23.6% in November, following a record 24.4% fall in October, while the economy slipped into a technical recession in the third quarter. Hardest-hit goods were luxury items such as jewelry and watches, with a massive 43.5% decline, according to government data.

“The decision is 100 per cent related to the anti-government protests that have discouraged mainland tourists from coming to shop in Hong Kong,” said Louis Tse Ming-kwong, managing director of VC Asset Management, to the South China Morning Post. “This is another damning verdict on Hong Kong’s retail business outlook. Hong Kong retailers going northbound in their expansion will become a trend.” Other retailers may follow to reduce the number of their shops in Hong Kong and reallocate their resources to mainland cities, which could offer cheaper rents and staff costs, Tse said. China’s leadership is also pushing for higher domestic consumption amid the rising purchasing power of the middle class, he added.