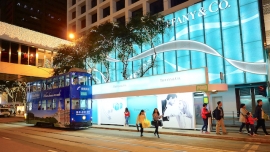 Luxury jeweler Tiffany & Co fell short of investor expectations for profit and sales during the third quarter ended Oct. 31 2019, as weak demand in the U.S. and retail disruption in Hong Kong offset growth elsewhere in China. Tiffany's business in the Americas and Europe has struggled to generate growth in recent years as price-conscious younger customers gravitate to lower-priced competitors like Signet Jewelers - which last week released “better-than-expected” results for the third quarter of fiscal year 2020. The trend highlights the challenges LVMH Moët Hennessy Louis Vuitton SE faces once it takes over the famed American jeweler.

Tiffany reported $1.01 billion in world-wide net sales in the third quarter, unchanged from a year earlier. The jeweler's net sales in the Americas fell 4% in both the third quarter and the year-to-date, to $423 million and $1.3 billion, respectively; comparable sales decreased 4% in the third quarter and 5% in the year-to-date. Sales were mainly dented by lower spending by foreign tourists, yet domestic demand also slipped, mostly among middle-income shoppers who appear to be shy about making expensive purchases. Meanwhile sales, in the Asia-Pacific region were flat, hurt by business disruptions in Hong Kong, where sales fell 49 percent. Despite double-digit growth in Mainland China, overall same-store sales, excluding the effects of currency exchange rates, were up 1 percent in the quarter, missing analysts' average estimate of a 1.44 percent increase, or $1.04 billion in sales.

Tiffany said net income decreased by 17% to $78 million, or 65 cents per share, from $95 million, or 77 cents per share, a year earlier. Analysts were expecting Tiffany to earn 85 cents per share in the quarter. Same store sales were also unchanged from a year earlier, compared with the growth of 1.4% analysts were expecting. Excluding Hong Kong, Tiffany said worldwide net sales and sales at stores open at least a year increased by 4% and 3%, respectively, from the prior year.

“Our underlying business remains healthy with sales attributed to local customers on a global basis growing in the third quarter, led by strong double-digit growth in the Chinese Mainland offset in part by softness in domestic sales in the Americas,” Tiffany CEO Alessandro Bogliolo said in a statement. In its second quarter, Tiffany reported earnings that topped analysts’ expectations, but its revenue fell as protests in Hong Kong disrupted sales and tourists spent less across the U.S. Management said in the last earnings report that if the situation worsened in Hong Kong, its fourth largest market, full-year sales results could fall closer to the lower end of its forecast.

For its fiscal year ending Jan. 31, 2020, Tiffany was originally calling for net sales globally to increase by a low-single-digit percentage, and for net earnings per share to increase by a low-to-mid-single-digit percentage. However, after the luxury jeweler reached the deal with LVMH, it said in an SEC filing it would no longer be providing guidance and that its most updated projection would no longer be in effect. The earnings report came a week after French luxury giant LVMH reached a deal to acquire Tiffany for $16.2 billion, or $135 a share, in cash. The boards of both companies approved the deal and the transaction is expected to close in the middle of 2020, subject to approval from Tiffany’s shareholders and regulatory approvals. The move, announced Nov. 25, will give LVMH greater access to U.S. luxury consumers and strengthen its position in the jewelry space.