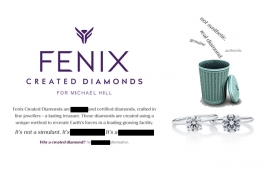 Barely a week after Jeweller Magazine reported Michael Hill (MHI), the jewelry retailer operating 312 stores in Australia, New Zealand, Canada as well as selling jewelry online, made misleading claims in its marketing by describing their lab-grown diamonds using terms as “real”, “genuine” and “authentic”, the company has changed its messaging. Jeweller Magazine said the use of these words not only conflicted with prevailing guidelines from various jewellers associations, such as the Jewellers Association of Australia (JAA), CIBJO, and Responsible Jewellery Council, of which MHI is a member, but also the US Federal Trade Commission’s (FTC) updated Jewelry Guides, all stating more or less the same, that it is unfair to use the word ‘real’, ‘genuine’, ‘natural,… or similar to describe a product that is manufactured or produced artificially. In addition, these industry standards require LGD to be clearly described as either, “synthetic”, “laboratory-grown” or “laboratory-created”.

Michael Hill clearly took note of the report and promptly changed the content on its website and removed marketing materials. Earlier this year, the FTC, charged with investigating allegations of deceptive advertising, warned eight jewelry marketers that some of their online advertisements for simulant or LGD jewelry was in violation of the FTC Act.