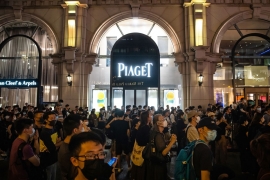 The impact from the Hong Kong protests is spreading to global luxury retailers, with jewelry - including Swiss watches - taking a hit as shoppers and big-spending travelers stay away. Unrest has forced many stores to close and sparked widespread social disruption. Luxury brand Richemont - which owns several of the world's leading luxury goods companies including Cartier, Piaget, Van Cleef & Arpels and Jaeger-LeCoultre - is the latest firm to say its business is being impacted by the ongoing protests.

Richemont said their sales in the Asia-Pacific rose in the last quarter, "led by mainland China, where strong sales were supported by lower VAT and custom duty rates," except in Hong Kong, where sales sank due to the recent street protests and the strength of the local dollar. The Swatch Group also previously noted that the unrest in Hong Kong, the top export market for Swiss watches, weighed on sales due to store closures and lower tourist arrivals, even though Swatch announced positive results for the period.

The Federation of the Swiss Watch Industry (FSWI) also reported that Switzerland’s exports of timepieces dropped 11% in June, with shipments to Hong Kong declining 27% in June and 6.6% in the first half. However, that market had been weakening even before the protests started as China tries to boost luxury consumption on the mainland. Shifting sales to China from Hong Kong, where margins are typically higher due to lower taxes, is negative for luxury-good makers. FSWI said June saw "the first significant fall of the year", losing ground in European strongholds (France -23.7%, Germany -2.9% and Italy -16.6%) as well as in Hong Kong. The US and the UK were the largest gainers among the major markets.