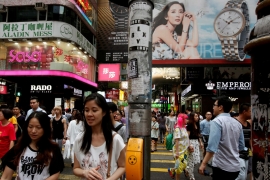 Hong Kong’s retail sales are expected to decline by 5 percent to HK$460 billion (US$59 billion) for the full year, dragged down by economic uncertainty, social unrest and a decline in mainland Chinese tourists, according to international advisory firm PriceWaterCoopers (PwC). The estimate is a downgrade from its earlier forecast of a 3 percent drop in sales, reflecting a weaker outlook, as government statistics showed first-quarter retail sales falling 2 per cent compared to the same period last year, according to PwC’s Global Consumer Insights Survey 2019 report, Back to the core: Reinvigorate experience-driven retail at a time of uncertainty. Luxury goods, along with electrical goods, experienced the biggest decline in sales and are expected to shrink even further against the backdrop of a weak Renminbi and waning consumer confidence, PwC said.

"The ongoing Sino-US trade dispute, equity market turbulence and volatility of Renminbi continue to cast a long shadow on consumers sentiment and actual spending,” says Michael Cheng, Asia Pacific and Hong Kong/China Consumer Markets Leader for PwC. "The downward revision from PwC’s earliest forecast of a 3% drop reflects a weaker outlook for the second half of the year, due to a combination of factors including external headwinds, economic instability, as well as the projected decrease in tourist arrivals and spending." Government data in the previous month have already revealed sluggish economic growth as the US-China trade war continues to affect consumer spending. PwC also pointed to the recent social unrest in the form of mass protests against an extradition bill introduced by the city's pro-Beijing leader Carrie Lam, which protesters believe will threaten Hong Kong's autonomy and undermine its independent legal system. They fear China could use it for political reasons.

“Local retail sales and mainland tourist arrivals are expected to continue on a downward trend through the rest of 2019," Chen says, "indicating a slowing consumer market in Hong Kong. The recent political and social unrest, temporary closure of the Peak Tram due to renovations, coupled with a lack of new tourist attractions might lower mainland tourists’ appetite to visit Hong Kong in the short term. Meanwhile, a weakening economy as well as uncertainty surrounding the trade dispute present risks to the outlook in the medium to longer run.” The number of mainland Chinese visitors to Hong Kong has fallen for three months in a row since February – a concern for retailers, as they make up roughly 80% of all arrivals in the city. Visitor numbers hit record highs after the Guangzhou-Shenzhen-Hong Kong Express Rail Link opened in September last year followed by the Hong Kong-Zhuhai-Macau bridge in October, linking the city to the mainland. In total, 51 million mainland Chinese tourists arrived in Hong Kong last year.

The major conclusion emerging from PwC's Global Consumer Insights Survey (GCIS): in addition to the traditional return on investment (ROI) metrics used to determine a company’s success, PwC believes it’s time to introduce another, consumer-centered metric, which they call ‘return on experience’ (ROX). They say that measuring ROX will help businesses understand their earnings on investments in the parts of their company directly related to how people interact with a brand. "This year’s tough retail climate underlines the importance for retailers to adapt to changing consumer preferences and spending patterns in order to maintain competitiveness and profitability," PwC says. "As shoppers nowadays have put a bigger focus on consumer experience, more and more retailers are moving to create a more engaging and experience-driven shopping journey with innovative and unconventional retail strategies."

The note that digital-savvy Chinese consumers tend to accept and embrace emerging technologies to a greater extent than their global counterparts. 68% of Chinese consumers surveyed purchase products online at least once a week. Indeed, the latest study by the market research firm eMarketer uncovers that despite the fact that China’s overall retail growth is set to slow down in 2019 amid geopolitical and economic uncertainties, the expansion will continue to be extremely strong online. According to an eMarketer forecast, China’s retail e-commerce sales is set to grow by roughly 27% to reach $1.94 trillion in 2019, accounting for around 37% of total retail sales. And nearly 80% will happen on mobile. The company projected that retail m-commerce sales will increase 30% to $1.56 trillion.

PwC says that technology enablement consequently fuels the hunt for new experiences that integrate digital into the offline environment. Close to 40% of Chinese respondents to their GCIS said their in-store experience would be enhanced by the use of technology. "As Chinese shoppers seek to redefine their experience with a frictionless purchase journey and a blend of both physical and digital interactions, retailers are thinking beyond the traditional return on investment (ROI) metrics to adopt a consumer-centred return on experience (ROX) strategy. Specifically, retailers need to map out their consumers' purchase journey, isolate key customer touch points and factors that drive experiential moments, and invest more in aspects which directly impact those interactions and yield measurable results."