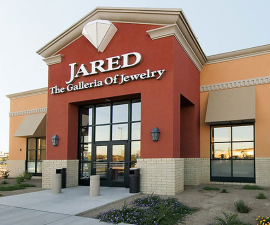 Signet Jewelers, which claims to be "the world's largest retailer of diamond jewelry," is asking its employees in Akron, Ohio and Dallas, Texas to apply for "voluntary buyouts". The buyout program was communicated to all Akron employees (2,600) and 780 in Dallas in a series of staff memos issued a week ago. The announcement came as Signet, which operates more than 3,500 stores including Kay Jewelers, Zales, Jared the Galleria of Jewelry and Piercing Pagoda, tries to cut costs as part of its “Path to Brilliance” business plan, spokesman David Bouffard said.

Signet Jewelers in January reported weak holiday sales and hinted that it will speed up store closings, a disappointing development for a retailer in what was a strong consumer spending environment over the holidays. MasterCard Spending Pulse recently estimated U.S. retail sales rose 5.1% during that period. For jewelry, the figure was a 3.7% jump. But Signet said sales at stores open for at least 12 months fell 1.3% in the nine weeks ended January 5. Signet pointed to “reduced traffic during key December gifting weeks.” Its higher-end Jared chain, which operates outside of malls in stand-alone stores, saw the worst of it with comparable sales down 8%. Signet CEO Virginia Drosos said in a statement that the company will “move decisively to improve profitability through aggressively optimizing our cost structure and continuing to right-size our store base,” retail executive speak for closing stores, and now for redundancies.

“I’ll start with the toughest aspect of the strategy - cost savings,” Signet CEO Virginia C. Drosos said in a memo to employees. “We have critical efforts going on in real estate to reduce rents, merchandise to reduce cost of goods, indirect spending savings, and many more. But we also need to make some hard decisions to get Signet where we need to be. To that end," she continued, "we are announcing a Voluntary Transition Program (VTP), which will provide eligible team members with the opportunity to voluntarily submit their application to transition out of the business with certain separation benefits,” Drosos wrote. The buyout is only offered to employees with at least two years of experience as of Feb. 2, 2019, Signet Chief People Officer Mary Liz Finn wrote in a memo. Signet’s “high production areas,” including distribution, manufacturing, customer care and security, are not eligible for the program.

While employees may volunltarily apply for the severance package, the redundancies are coming one way or another. “Based on participation," Finn wrote, "we may need to take additional actions including an involuntary reduction-in-force.” The message seems clear enough: take the buyout or risk being fired without one. Signet also announced it is deferring "merit increases" (i.e., raises) in 2019 for Support Center team members in order to save money, Finn said.

Signet has had a rocky couple of years. The jeweler recently agreed to pay $11 million in penalties to federal and state regulators to settle charges it was opening credit-card accounts without customers’ consent at its stores. The company has also had to deal with the fallout in 2017 of accusations of widespread sexual harassment. The soft Christmas period prompted Signet to lower its full-year forecasts, sending its shares down 22% to $26, barely more than one-sixth their level in 2015.