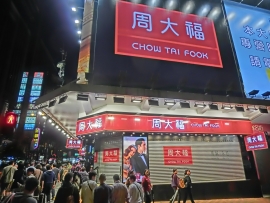 One of the bellwether jewelry brands and the largest jeweler in China, Chow Tai Fook, has reported that same-store-sales of gem-set jewelry in Q4 2018 declined by 5% in mainland China and 8% in Hong Kong and Macau “amid an uncertain macroeconomic environment.” This marks the first quarterly decline in two years for the company despite China’s lowering of its jewelry import tax by an average of 20.7 percent last summer, which was expected to bolster sales. That announcement came after jewelry products were re-categorized by the government as “general consumer goods” instead of “luxury” goods, but that was before the US-China trade war ignited fears of a slowdown in China’s economy prompted by a contraction in Chinese exports.

At the end of November, rthk.hk, citing figures from the Hong Kong government, reported that retail sales had expanded at their slowest pace since June 2017, growing by just 1.4 percent in November when compared to same period in the previous year, while sales had grown by nearly 10 percent during the first eleven months of 2018. They also noted that while sales of medicines and cosmetics grew 10 percent during the period, the increase was offset by falls in big-ticket items such as jewelry, watches and vehicles. "The government said the moderation in overall sales reflected more cautious consumption sentiment in the face of various external uncertainties such as China-US trade tensions and the volatility in global financial markets."