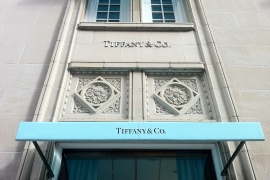 Tiffany & Co's worldwide net sales increased 4% to $1.0 billion in the third quarter, with higher spending by local customers noted across the board, but a decline in purchases by Chinese tourists in the United States and Hong Kong put a dent in the jeweler’s Q3 results. The stock market took notice, as shares of Tiffany & Co. plunged 12 percent following their publication of the results, as industry analysts had been anticipating better results. “In the Americas, the growth went from 7 percent year-to-date to 5 percent in the quarter,” said CEO Alessandro Bogliolo on a conference call following the release of its financial results. “This we mainly attribute to Chinese spending. Because if we look at sales to domestic customers in North America, we have seen solid growth in the first two quarters and also in the third quarter." He emphaszed that Tiffany's has seen no slowdown from local customers in the U.S., or anywhere else.

However, while Bogliolo said in the conference call there was, "lower-than-expected spending in the third quarter attributed to Chinese tourists in the U.S. and Hong Kong and lower wholesale travel-retail sales in Korea," he does not attribute this to waning consumer demand. “We don’t see a slowdown of demand by the Chinese. What we see is that Chinese tourists are traveling less,” said Bogliolo. He also mentioned that Tiffany’s business in mainland China remains strong, achieving double digit sales growth throughout the year. In response to the shift, Tiffany’s is increasing its inventory at its stores in Mainland China so it does not lose sales.

Bogliolo speculated that the deteriorating value of China’s currency is to blame for the drop in Chinese tourists. The yuan sank to a 10-year low against the dollar at the end of October. It strengthened slightly this month, leading many to believe that Beijing had stepped in to stop its slide. But others see broader issues at play, including a simmering trade war and the potential for a slowing global economy that is squeezing even the wealthy in China. “There are major strains in our political relationship with the Chinese government,” Robert Burke, a luxury consultant in New York told the Associated Press. “It doesn’t put them in the mood to come to the U.S. to spend their hard earned dollars. They do have the option to buy in mainland China.”

Worldwide net sales increased 4 percent to $1 billion, and comps rose 3 percent. By contrast, in the prior quarter, net sales jumped 12 percent, and comps climbed 8 percent. Net earnings declined 5% to $95 million, from $100 million a year ago, which the company attributed to the negative impact of, "Planned higher strategic investment spending in the quarter and year-to-date, which is intended to support long-term sustainable sales growth." Bogliolo asserted, "Our full year outlook is unchanged. We believe we have substantial growth opportunities to pursue as a geographically-diversified luxury brand and are not distracted by external factors, such as the negative effects of a strong U.S. dollar or fluctuations in tourist spending."