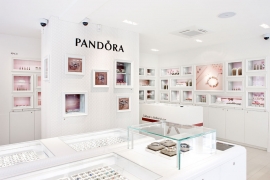 Jewelry maker Pandora, known for its charm bracelets, reported Tuesday that Q3 sales in the U.S. fell 12% year-over-year to $153.2 million (DKK 1 billion), while  worldwide revenue decreased 3% in local currency to $765.8 million (DKK 5 billion). The "unsatisfactory" results prompted the company to reduce its sales and profit margin guidance for this year following revenue declines in consecutive quarters, and is now saying it expected sales in local currencies to increase by between 4 and 7 percent this year, compared with the 7-10 percent it previously projected. The retailer plans a “reset” after cutting its outlook and abandoning a long-term sales goal. The company has been looking unsuccessfully for a new CEO after Anders Colding Friis resigned last August after the previous cut in the company’s annual guidance caused its stock to plunge more than 20 percent. Rumors are still floating that that a private equity firm might acquire Pandora and take it private. Pandora's share price fell 53% between May and August, and after a modest recovery, it has again tumbled 16% since the beginning of the week.

Chief Financial Officer Anders Boyer said the latest results were “unsatisfactory” and the start of Q4 sales are "weak". Per Hansen, an investment economist at Nordnet in Copenhagen, was more blunt, calling them “terrible”, reports Christian Wienberg for Bloomberg. In an attempt to shore up investor confidence, Pandora has unveiled an initiative, called Programme Now, that it hopes will reignite sustainable revenue growth after group revenue dropped 3 per cent in the third quarter of 2018. Under the program, Pandora will significantly reduce its franchise acquisitions and scale back new store openings. For the stores it does open, it will concentrate on growth markets, such as China, India and Latin America. It hopes the move will grow like-for-like sales, if not total sales. In order to achieve this, the business plans to enhance its marketing, personalisation, digital and e-commerce capabilities, as well as the in-store customer experience.

As Wienberg writes, "After at least two years of false starts in which the jeweler has been struggling with an increasingly challenging U.S. retail environment, investors have been losing faith. Pandora’s move to reposition itself in the so-called affordable luxury segment, during which it expanded to more than 2,500 stores in shopping malls around the world, has fallen flat."