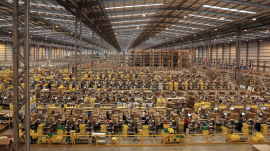 Amazon's filing for a trademark, "For Keeps by Amazon", makes it appear likely that the e-tail giant might be on the verge of launching a new jewelry brand. According to a filing with the US Patent and Trademark Office on September 19, the patent is for “online retail sales of jewelry, namely precious metals and their alloys and goods in precious metals or coated therewith."

Amazon currently has about 75 private brands to its name, including Amazon Elements (vitamins, supplements, health items, baby wipes), Wag (dog food), Mae (Intimate apparel), Spotted Zebra (kids clothes), Good Brief (men’s underwear) and Rivet (home furnishings). it also already features its own jewelry brand: its "Amazon Collection" sells thousands of jewelry items - including diamond jewelry, lab-grown diamond and simulant jewelry - at discount prices. If a new "For Keeps" line is to be distinguished from its existing line, this may suggest that Amazon has its sights set on entering the luxury jewelry market and potentially compete with other luxury e-commerce platforms such as Net-a-Porter and Farfetch, which recently went public with an $885 million initial public offering (IPO).

Amazon's private brands have been taking significant heat lately, with accusations ranging from illegal monopolization and trademark infringement to unfair competition regarding the company's strategy as both retailers of goods and marketplace platform for other sellers. Critics, including European Union's competition commissioner Margrethe Vestager and US Senator Elizabeth Warren, say that limits competition as Amazon uses data from all of these sales to help launch its own brands which can, in turn, steal away that business. From its beginnings in 1994, Amazon’s platform was designed to democratize retail. Small vendors or manufacturers could sell outdoor grills, computer bags, and children’s toys alongside established brands. Now, with its expansion into private label, Amazon has shifted away from being an impartial, may-the-best-product-win distribution partner to being a direct competitor to those other vendors. It is currently subject to an anti-trust investigation initiated by European regulators.