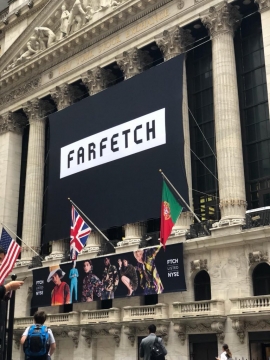 Farfetch (FTCH), the London-based luxury fashion e-tailer, has just pulled off one of the largest IPOs of the year. Selling 44.2 million shares at $20 per share, on the high end of its pricing range of $17-19 - a pricing range was already raised from the initial guidance of $15-17 - the IPO raised $885 million and set a valuation of roughly $6.2 billion on the online giant after factoring in shares already held by employees. Farfetch opened at $27 and posted an intraday high of $30.60 as shares were trading as much as 39 percent above its initial public offering at $20 per share on the New York stock exchange on Friday.

Reuters writes that the flotation comes at a time of growing competition among independent online fashion retailers and luxury groups rolling out their e-commerce operations, including cash-rich luxury heavyweights like Louis Vuitton owner LVMH, which is experimenting with its own multi-brand site. Richemont, the Swiss conglomerate that owns jeweler Cartier, this year took control of now delisted Farfetch rival Yoox Net-A-Porter, in a deal that valued that platform at 5.3 billion euros ($6.2 billion). Online sales are set to make up a quarter of the luxury industry’s revenues by 2025 from just under 10 percent now, according to consultancy Bain, thanks in part to demand from young shoppers in tech-savvy markets like China. “It is an industry that, rightly so, chooses their path and their channels very carefully,” said Farfetch Chief Executive Jose Neves, adding that, for most luxury retailers, it is all about brand image, aesthetic and high-end customer service. “But I think the industry has seen the potential of reaching key demographics like the new millennial customer that thinks digital first. These customers are online - they’re not offline.”

Jing Daily says that with this new capitalization, Farfetch CEO and founder José Neves, who retains a controlling stake in the company, can afford to invest in new technology and to acquire rivals. The new injection of capital sets up Farfetch well against similar rivals like Secoo and could pose a threat to even the much larger Alibaba, which has a much broader base and millions more customers but started its Tmall luxury division years after Farfetch launched. Farfetch has yet to record a profit in its 10 years of operation, but that appeared to have little impact on investors’ appetite to buy into the company. Farfetch’s niche appeal may prove robust in the long run, especially with luxury labels continuing to resist selling on Amazon for fear that brand images could be compromised.