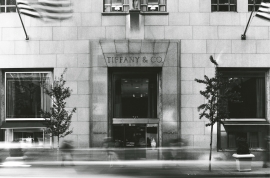 Tiffany & Co. announced earlier this week it would undertake a three-year renovation of its iconic flagship store on Manhattan’s Fifth Avenue, made famous by the film Breakfast at Tiffany’s and "one of the most recognized jewelry retail spaces in the world," according to Anthony DeMarco. The thorough makeover - which the company is calling “a complete renovation” of the 10-story building - is part of an overall strategy “to redefine the modern luxury retail experience." Work is scheduled to commence next spring and be completed by the fourth quarter of 2021. During renovations, Tiffany will expand its retail space in a location at 6 East 57th Street.

“The newly reimagined flagship will serve as the modern crown jewel of our global store network,” said Tiffany CEO Alessandro Bogliolo in a statement. "We are extremely excited about the opportunity to transform our iconic New York flagship store and create a dramatic new experience for customers.” While the company did not provide a specific figure concerning the cost, it said the work would add the equivalent of 1% to 2% of worldwide sales to its expenditures over three years, or roughly $125 million to $250 million based on last year’s revenues. While the store’s relative importance as a source of direct sales has fallen, generating less than 10% of its $4.2 billion in sales as Tiffany has expanded its footprint over the years, the flagship remains the focal point of Tiffany’s brand identity. The company recently transformed its fourth floor into a popular restaurant.

The 727 Fifth Avenue flagship store has been the home of the luxury jeweler since 1940, although Charles Lewis Tiffany opened his first boutique at 259 Broadway in 1837. "At the time," as JCK's Rob Bates points out, "the store was notable for having one of the first central air-conditioning systems and a main floor free of columns." He adds, "Over the years, that floor has made cameos in a number of films, including Sleepless in Seattle, Sweet Home Alabama, and, of course, Breakfast at Tiffany’s."