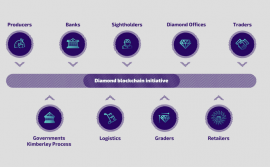 Tracr, the end-to-end diamond industry blockchain being developed by De Beers Group in collaboration with industry stakeholders, has announced the appointment of Jim Duffy as General Manager to lead the next phase of the platform’s development. Duffy assumes the new role as the platform starts to build greater scale, with more than $100 million worth of rough diamonds having been registered on the platform since the launch of the pilot in January 2018.

As General Manager of Tracr, he will be responsible for further development and scaling of the platform and leading a team of world-class diamond industry and technology experts. He will oversee all operational and commercial aspects of the venture, driving its go-to-market strategy and engagement with stakeholders. Prior to this appointment, he led several tech start-ups and has worked both in large multinational technology companies and in the financial sector. The Tracr pilot currently involves five leading global diamond manufacturers and the world’s largest retailer of diamond jewellery, Signet Jewelers. De Beers calls Tracr the first blockchain that creates a tamper-proof, immutable record of a diamond’s journey throughout the entire value chain – from mine to cutter and polisher through to the jeweller. What differentiates it is that while most platforms are based on company record-keeping, Tracr hopes to use scientific data to uniquely identify each diamond and creating an immutable ID.

“Jim’s skills and experiences are the perfect fit for realizing the vision we have for Tracr -  a unique digital platform that will enhance long-term sustainability and deliver a range of benefits for the whole diamond industry,” said Neil Ventura, De Beers’ executive vice president for strategy and innovation. Duffy commented, "In the next several months, we’ll be focused on continuing to bring new strategic partners on board to participate in the Tracr pilot and incorporate the learnings from the pilot phase into what will be a collaborative and purpose-built industry platform.”