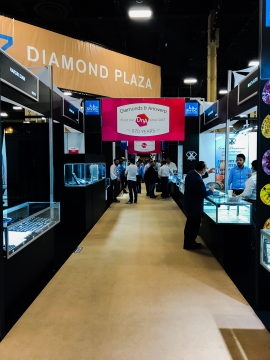 This past Monday, the JCK Las Vegas show and jewelry week surrounding it came to its conclusion with steady trading reflecting a confident US market, despite a significant dip in the number of exhibitors and foot traffic at the various shows. The exhibitors and organizers acknowledged the decline of visitors, but were adamant that those attending the events headed out to the desert with a greater sense of purpose than in prior years, as buyers were looking for specific goods and exhibitors were maintaining existing relationships. Over 2,300 exhibitors participated in the JCK and Luxury shows, according to organizers, and more than 20,000 visitors registered to attend.

The decline in attendance was likely due to the high cost, several visitors told us, saying it is worthwhile expense from a long-term perspective, but might have kept at home those not needing to replenish their stocks immediately. Exhibitors from the diamond pavilion questioned whether trade shows are still as relevant today as they were in the past. Trade fairs serve as an ideal platform for people to meet at specific times throughout the year and replenish their stock, as well check out the upcoming trends and innovations. However, the increasing ease of travel and online access diminish the need for these scheduled visits. Despite the dip in attendance, dealers seem to be in a better place in terms of both the economy as well as overall sales. Nonetheless, while the market is robust in terms of the number of transactions, profitability is still a big concern.

The hottest topic this past weekend was undoubtedly De Beers’ announcement of Lightbox, their laboratory-grown fashion jewelry brand. In an effort to enlighten retailers and traders, De Beers held a seminar to address traders’ confusion about their incursion into the synthetic market, but also to remind everyone that the natural diamond industry was, and always would be, their primary business. At their Las Vegas introduction to their latest venture, De Beers CEO Bruce Cleaver said, “Synthetics will never be as big as our natural business, and our investments into the space are dwarfed by those elsewhere. But we have a massive advantage over everyone else, given the know-how and infrastructure provided by Element Six. So it’s something we have decided to be very serious about.” A $94 million plant that De Beers is building in Gresham, Oregon, is expected to generate half a million rough carats a year after its completion in 2020.

He described Lightbox as a colorful fashion jewelry line that is very accessible, with prices retailing from $200 for a quarter carat, up to $800 for a carat, and an additional jewelry setting charge in either silver or 10-karat gold. Other topics covered included the blockchain initiatives and the future of the business. And while De Beers’ explanation of their reasoning and objectives behind their LGD adventure seemed to assuage most traders’ fears, Martin Rapaport was not among the converted. The Chairman of the Rapaport Group gave his annual “State of the Diamond Industry” address, articulating his concern that Lightbox would not just disrupt the LGD market, but would also kill off smaller companies and those trading in smaller natural diamonds in the process. He emphasized that retailers should know and go to the source of their goods, encouraging them to visit Sierra Leone and Surat to get acquainted with the diamond pipeline. He also talked about RapNet’s new initiative, Rap Exchange, but the audience was left without obtaining clarity about what that will entail.

Exhibitors were pleased to hear that next year the JCK show will be returning to its former venue at the Venetian and Sands Expo Center, closer to the Couture jewelry show, which should attract a larger and more diverse audience.