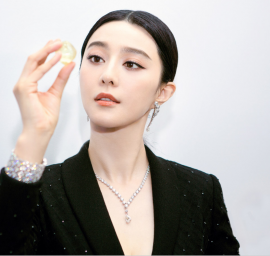 With marriage rates falling and divorce rates climbing, the diamond industry is facing a challenge to win over Chinese millennial consumers, Ruonan Zheng writes for Jing Daily. Fortunately for the industry, they are looking beyond tradition for reasons to purchase diamonds. Chinese millennials are said to account for 68 percent of all diamond sales in China, a number that’s significantly higher than other markets. The Diamond Producers Association, which represents the world’s seven biggest diamond mining companies is looking to expand the reach of their "Real is Rare" campaign to China in April this year, is hoping its message of expressing one's identity through diamonds will resonate with Chinese millennials.

“A diamond is an investment for me. I bought it for the inherent value, but more importantly, it feels good to treat myself,” says Sheryl Li, 28, who works at a hedge fund in New York City. Zheng writes that Li saved a small amount each month from her annual salary to purchase the diamond. For Li, diamonds don’t symbolize marriage, but the commitment to something else — her financial independence. And according to Zheng, Li is not the only Chinese women who thinks this way. According to research from advertising agency J. Walter Thompson, over 40 percent of Chinese women regard financial independence as more important than marriage, and over 30 percent of them think financial independence equals success. Many brands have shifted the focus of their storytelling to women away from marriage and towards empowerment.

Zheng writes that as women become more independent and financially successful, they are less willing to tolerate an unequal marriage. Before, marriage could be seen as a means to gain financial safety, but in today’s society, to marry or not, or remarry or not, doesn’t have a single, definite answer. Consequently, the magical symbolism of “one diamond forever” has faded. Citing figures from China’s Ministry of Civil Affairs, Zheng says the number of weddings in China fell 8% to nearly 12 million in 2015 while the divorce rate has risen. "When marriage is not eternal for Chinese millennials, it challenges the diamond industry that builds upon the notion of eternity - bad news for luxury jewelry brands." Nevertheless, it also opens the opportunity for millennials to reinterpret diamonds as accessories, and to buy them just for themselves.