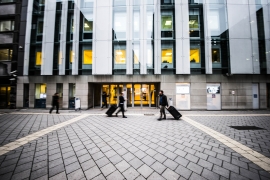 The Antwerp World Diamond Centre has announced the appointment of six new Board Members representing the trade on the Board of Directors. In the past two days, the Antwerp diamond community participated in Covid-19 safe elections at the AWDC’s building, choosing two representatives among their peers of small, medium-sized and large companies, as voters and candidates are divided in three categories, according to their average turnover.

Board Directors Chaim Pluczenik, Michel Nasielski and Philip Hoymans, representing the diamond bourses and Mrs Martine Reynaers as Independent Director remain in their position for two more years, until the 2022 elections.

The new Board of Directors will also elect a new President for the AWDC among its members. The Board will bid farewell to outgoing AWDC President Nishit Parikh, who will be retiring after two years in office as President. The AWDC expresses its gratitude towards outgoing Board members Mr Nishit Parikh, Mr Vimal Lakhani, Mr Rajiv Kothari, Mr Chetan Shah, Mr Samir Mehta and Mr Jacques Weisz.