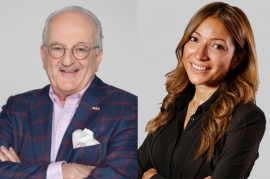 During a virtual Board Meeting, the Board of Directors of the World Diamond Council, the organization that is mandated to lead the industry's efforts in combating conflict diamonds, elected Edward Asscher as President, serving a second term at the helm of the WDC. In a press release, Edward Asscher, who recently took a step back in the Asscher Diamonds family business, commended outgoing President Stephane Fischler; “In taking over from Stephane, I am filling giant shoes. As WDC President he spoke with a clear moral voice, emphasizing the natural diamond’s potential to act as catalyst for social and economic development. This is a theme that I will continue over the coming two years.” For the first time in the history of the organization, the board elected a female Vice President, Feriel Zerouki, Senior Vice President of International Relations & Ethical Initiatives at the De Beers Group, who is set to follow Mr. Asscher and become WDC President in 2022.

In his final address, outgoing President Fischler underscored the pivotal role of the Kimberley Process in a sustainable future for the industry. "The KP has the exceptional opportunity to focus on solutions and not merely embargoes. But it can only do so if it faces its challenges with honesty and candor, and focuses on those processes that can truly trigger long-term change."