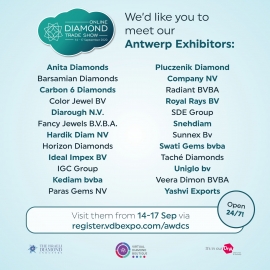 With the announcement of the cancellation of the November GemGenève Show, it seems like the last international offline trade show is now officially off the calendar. Today, Informa Markets issued a release that states "Jewellery & Gem WORLD Hong Kong (JGW) goes virtual for 2020", with the traditional trade fair resuming in September 2021. The mother of all trade fairs, the September fair was initially postponed to 9-13 November, the virtual event, dubbed "Jewellery & Gem Digital World", is now slated for 27-29 October and according to the release will feature a series of digital events such as webinars and digital catalogues.

Interested buyers can register to visit the Online Diamond Trade Show via register.vdbexpo.com/awdcs