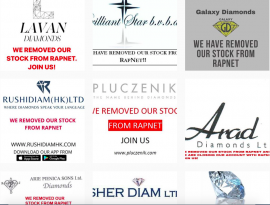 The Rapaport Price List - the benchmark for most polished diamond traders - published last Friday, March 20, announced steep, across-the-board price drops that have angered many diamond traders and unleashed a wave of protest on social media. "Our heart goes out to the diamond community during these difficult times," a statement read. "We understand that today’s reduction of prices in the Rapaport Price List is upsetting." They might have underestimated the response.

After a weekend of protest from diamond companies and traders in the form of direct letters to the publisher and posts on the popular Telegram and Instagram apps, publisher Martin Rapaport yesterday (March 23) released another statement to the diamond community stating that the price list publisher would put it to the community to vote on a temporary suspension of the price list.

"For the past few days, I have received hundreds of emails and numerous calls from leaders of the diamond industry," he wrote. "Many have expressed outrage about the reduction of prices in our March 20 price list. Others have asked that we suspend publishing the price list. While we reject the idea that prices have not declined ... we are receptive to calls for a short term suspension of the price list." Rapaport is considering suspending publication of the price list until May 1, and has requested Rapaport members to vote on the issue until March 24 at 10 am New York time.

In response, many diamond traders have removed their stock from the Rapaport trading site, RapNet, and are calling for a boycott on the vote. The price cuts announced last week were visible across most diamond categories, with the drops ranging from 5% to 9% on both rounds and fancies. The average drop was generally estimated at about 7%. Rapaport says he understands the frustration of traders, but insists the price changes reflect the current market.