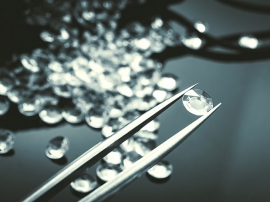 India’s exports of cut and polished diamonds declined dramatically compared to last year’s levels of trade, declining by 41% during the month of February 2020, according to provisional data released by The Gem & Jewellery Export Promotion Council (GJEPC). The GJEPC attributed the decline mainly to the impact of the Covid-19 coronavirus.

Rough-diamond imports in February, however, took a turn for the better, increasing 6% year-over-year to US$1.47 billion as compared to US$1.38 billion imported during the previous February, and increasing nearly 93% compared to the US$763 million imported in January. For the fiscal year to date, imports of rough diamonds have declined 13% to US$12.39 billion from US$14.31 billion a year earlier.

Just as with diamonds, India is the leading polishing center for polished synthetic diamonds. Consistent with recent months, in February 2020 the value of India's polished synthetic exports jumped again, growing 59% year-over-year to $37 million from $23 million in February 2019. Imports of rough lab-grown diamonds grew significantly to $25.5 million, a 171% increase from the $9.4 million imported a year ago in February, while imports of polished lab-grown diamonds declined to $6 million in February 2020 as compared to $13 million a year earlier. For the fiscal year to date, imports of rough synthetic diamonds reached $318.6 million,  first eleven months of the fiscal, up from $123.7 million a year ago, an increase of 158%.