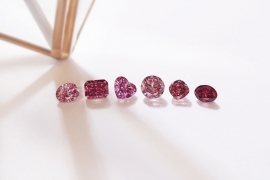 Rio Tinto’s Argyle Pink Diamond tenders, the 35th since the mine started producing the rare pink, red and violet diamonds, received a lot of interest, the company says. As the Argyle mine is due to close next year, the 2019 tender is most likely one of the last tenders, explaining the double-digit growth in bids made on the lots of polished pinks, reds and purples. The most valuable diamond in the selection, the Argyle Enigma, was bought by Australia-based Star & Kiven Diamonds (Aurostar group), who also won the winning bid for the Argyle Verity.

The company estimates that in the final year of production, some 150 of these rare pinks could be recovered, the end of an era in which the Australian mine produced over 90% of the world’s pink diamond supply. Since 2000, the prices for Argyle pinks have risen 500%.
Experts believe the closing of the world’s only consistent source of these rare diamonds, a finite, unrepeatable source, will lead to a strong secondary market for the branded Argyle Pink Diamonds (ADP), as heritage stones with serious investment potential.