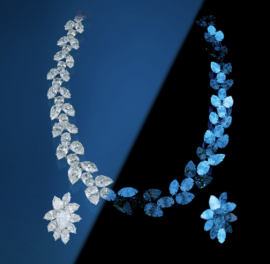 Russian diamond miner Alrosa has created a brand - Luminous Diamonds - to a promote a characteristic that is prevalent in their diamonds: fluorescence. In doing so, it is seeking to create a niche for its natural stones by marketing the added value fluorescence can bring to diamonds when seen in the proper light, so to speak.

Fluorescence refers to a diamond's tendency to emit a soft blue-colored glow when subjected to ultraviolet light, such as from a 'black light' or the sun, and is a characteristic of 25% to 35% of diamonds, with about 3% to 10% having strong fluorescence. Over the past decade or so it has come to be perceived as a defect that drives the value of fluorescent diamonds down, despite findings from the most highly reputable diamond labs confirming that the level of fluorescence has no widely perceptible effect on the color appearance or transparency of diamonds, and in some instances the effect is positive.

Last year, HRD Antwerp - a leading European authority in diamond certification - undertook a study entitled “The Effect of Fluorescence on the Color of a Diamond”, concluding that even strong fluorescence does not negatively impact a diamond’s appearance. In fact, their findings demonstrate the contrary: under normal conditions and even when outdoors, strong fluorescence has a positive influence on the color of diamonds. This finding directly contradicts the common perception that fluorescence is a negative property of diamonds, driving down their value. Given HRD Antwerp’s findings, they conclude there is no justification for the price penalties that currently apply to fluorescent diamonds, with discounts reaching 25% to 45%. HRD Antwerp also confirmed that not only does fluorescence have no detrimental effect on the appearance of diamonds in a laboratory setting, when viewed through the pavilion in sunlight it results in a clear improvement in a diamond’s color.

As reported by Reuters, Alrosa's new brand seeks to lure the Millennial and GenZ consumers with the uniqueness of fluorescent stones. "Recent research conducted by a consulting company for Alrosa in the United States and China showed millennials liked the stones for their unusual quality in jewelery," according to Alrosa CEO Sergei Ivanov. “We saw that it can become a fashionable product and interesting for these young people,” he said. The same research also showed positive results among women, so the “Luminous Diamonds” brand seeks to appeal to women’s independence and purchasing power, which is rising in the US, China and India, the CEO added. “It will be a special line. A diamond which glows in a night club, in a theater or even in the rays of sun,” Ivanov said. “We see this demand ... and are sure that we will convert it into sales.” Alrosa, which now sells these diamonds mixed with others in “lots”, expects retailers to start offering its “Luminous Diamonds” in a year in separate corners of their stores.