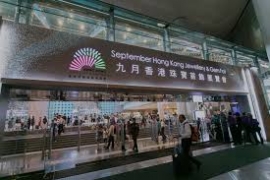 The organizers of the Hong Kong Jewellery & Gem Fair wrote a letter on Thursday to the three diamond trade organizations calling for the postponement of the fair, saying that the September show will be held as scheduled and reassuring them that "there are positive signs indicating that the situation is cooling down." In that regard, they may have spoken too soon, as the protests turned violent again on Saturday. The organizers also rejected the trades organizations' claims that exhibitors are requesting the show be postponed due to ongoing protests in the municipality.

"We have not received demands for cancellation as stated in your letter," wrote Celine Lau, Director of Jewellery Fairs for Informa Markets, claiming quite the opposite is true. "Instead, what we have been getting are several calls from exhibitors inquiring about the possibility of securing better booth locations in case of any cancellations, and inquiries for participation. We continue to receive visitor pre-registrations on a daily basis. Rumors about the fair’s alleged cancellation/postponement have in fact drawn more active inquiries on the show’s exhibitor profile and contents."

The letter she is referring to was a joint mailing from the Antwerp World Diamond Centre (AWDC), India's Gem and Jewellery Export Promotion Council (GJEPC) and the Israeli Diamond Institute (IDI) voicing their concerns and those of their exhibitors regarding participation in the Hong Kong fair. "As trade representatives of the world's largest trading centers - Mumbai, Antwerp and Ramat Gan - we are tasked with voicing the needs of our exhibitors, and at the moment we do not believe these are being heard," the letter reads. They note that some 30-40% of their exhibitors are demanding to cancel their participation in the show whether the situation improves or not, citing security, travel and insurance issues as well as concerns for low visitor levels.

Lau wrote that the participants need not worry about airport disruptions or insurance: "The Airport Authority has obtained a court injunction to ensure that the airport’s operations will not be affected by protest actions." She adds, "To ease your concerns on insurance coverage for your members’ merchandise, we have obtained a confirmation from [insurance providers] Malca-Amit and Brinks that there is NO change in the insurance policy in relation to the public incidents in Hong Kong. These are facts illustrating that the jewelry community is ready and looking forward to this important event! ... The last three quarters have been quite challenging for the industry, and this is the very reason why exhibitors, buyers and stakeholders across the entire business spectrum are fully engaged to get the most out of the September Fair. For exhibitors, this show represents their last major opportunity to capture business in 2019. Buyers are reasonable business people, and they are smart enough to know when and where to seize opportunities."

She concludes her letter by emphasizing that, "As of today, the travel alert level on Hong Kong remains comparable with the current alert level assigned to the UK, Europe, China and several other countries."