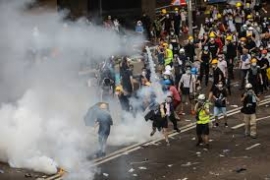 Three leading diamond trade bodies have submitted a joint appeal for the postponement of the Hong Kong Gem and Jewellery Fair, September 2019, until there is a more stable climate in the city.

In a letter obtained by The Diamond Loupe to the organizers of the show Informa Markets, the Antwerp World Diamond Centre (AWDC), India's Gem and Jewellery Export Promotion Council (GJEPC) and the Israeli Diamond Institute (IDI) have voiced their concerns and those of their exhibitors regarding participation in the Hong Kong fair. "As trade representatives of the world's largest trading centers - Mumbai, Antwerp and Ramat Gan - we are tasked with voicing the needs of our exhibitors, and at the moment we do not believe these are being heard," the letter reads.

Pointing to the impact the protests will undoubtedly have on foot traffic (i.e., business opportunities) at the show, on travel to the show and around the city, as well as uncertainties about insurance coverage and transport of valuable goods, the organizations write, "you cannot, in good conscience, expect us or the exhibitors to not only risk their goods, but also the wellbeing and safety of their employees."

The trade organizations say that some 30-40% of their exhibitors are demanding to cancel their participation in the show whether the situation improves or not, as their clients have already indicated that they have no intention of going, and concerns of security abound.

As one participant wrote to the AWDC organizing team, "I enquired to my insurance broker as well as to my underwriters to know whether my goods were insured in the event of riots or a strike around the airport or at the convention center. The answer was no! Moreover, according to them, most of the exhibitors are not insured for such events unless specifically stipulated in their policy. The possibility to get such coverage now is obviously almost impossible. It’s unthinkable to exhibit goods without proper insurance coverage if less than a mile away from the convention, thousands of people are protesting."

The AWDC, GJEPC and IDI also raise the issue of financial compensation in the form of a discount or refund for all participating companies, given that participation in the show comes at a great expense. "In light of recent events, we urge Informa Markets to consider the following; rather than potentially risking an empty show in terms of both visitors and exhibitors, postpone the show to a later date ... once Hong Kong is in a more stable climate," the organizations concluded.