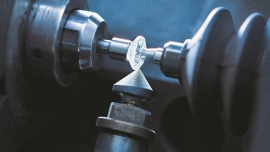 India's cut and polished diamond exports declined by more than 18% year-on-year in July, representing the lowest level of polished exports since December 2018. India's exports reached only $1.50 billion last month as compared $1.84 billion during the same month a year ago, as manufacturing has slowed significantly and traders try to move goods from stock while facing the headwind of an existing glut on the market.

Reflecting that downturn in manufacturing, rough imports to the polishing center last month fell by 34% to $1.10 billion as compared to $1.67 billion imported during the previous July. In volume terms as well, rough imports fell 10% to 11.74 million carats in July 2019 from 13.02 million carats during July 2018.

For the fiscal year to date (April-July 2019), polished diamond exports have tumbled 17.5% to $6.70 billion as against the $8.13 billion exported over the same months last year, and are down 14% from January-July. Imports of rough diamonds showed a decline of 28% to $4.51 billion from $6.26 billion during the same four months a year earlier; in volume terms, imports fell by 22% from 60.80 million carats in April-July 2018 to 47.58 million cts in the same period in the current fiscal year. For the calendar year to date, rough imports have declined by 26% to $8.2 billion.