The Spirit of the Rose: Alrosa’s Pink Diamond Poised to Earn Over $60 Million 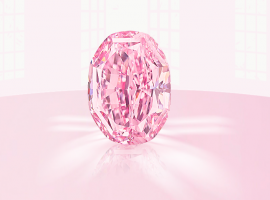 A 14.83-carat pink oval diamond, cut from a rare 27.85 carat clear pink rough diamond mined in 2017 by Russia’s Alrosa could earn more than $60 million when it goes up for sale in November. Named The Spirit of the Rose (“Le Spectre de la Rose”) as a tribute to a legendary short Russian ballet that premiered in 1911, the preparation and cutting process was performed at the “Diamonds ALROSA” cutting factory in Moscow, and it will be the most expensive stone ever polished in Russia.

According to the Gemological Institute of America (GIA), the diamond is of Fancy Vivid Purple-Pink color, Internally Flawless clarity, Excellent polish and Very Good symmetry, and is one of the largest pink diamonds in the world. It took a whole year for Russian cutting masters to turn the unique rough diamond - the largest of its kind ever found in Russia - discovered in at the Ebelyakh deposit in Yakutia into its polished form. The oval shape ensured that the diamond would be of the maximum possible size, and the dozens of facets emphasize its gentle, rose-petal color. Prior to the recovery of the rough stone, named "Najinsky", Alrosa’s largest pink gem had weighed 3.86 carats.

The diamond miner has siad several times this year that it is aiming to become the leader in the international market for colored diamonds, last February giving a preview of its collection of large colored diamonds, with the star of the show being The Spirit of the Rose. “Pink diamonds among the blue ones are considered to be the rarest and most precious of all," said Yury Okoyemov, Deputy CEO of Alrosa said at the time, "and the size and clarity of this specimen make it one of the best to be discovered anywhere in the world in recent years. I am sure that this diamond will be the most expensive in the history of Russia’s gem cutting industry.”

The GIA also stated that the stone is the biggest fancy vivid purple-pink diamond they have ever certified. “A large fancy vivid purple-pink, internally flawless, with perfect visual characteristics such as this one, enters the market literally, once in a generation," said Eden Rachminov, chairman of the board of the Fancy Color Research Foundation FCRF). He said the Spirit of the Rose may be one of the most expensive pink diamonds ever, saying it could fetch between $60 million and $65 million. "Its beauty overcomes the important pink diamonds sold at auction in the last decade and its retail price should exceed €60 million.”

According to Alrosa spokeswoman Evgeniya Kozenko, the Spirit of the Rose will be the most expensive stone ever polished in Russia. The company has not yet decided how it will sell the gem, via auction or otherwise, but set the sale date for November this year. Previously, Sotheby’s Auction House set the record for a gem price in 2017, selling the 59.6-carat Pink Star diamond for $71 million (€64 million). The Oppenheimer Blue diamond sold by Christie’s Auction House a year earlier ranks second at $58 million (€52 million).