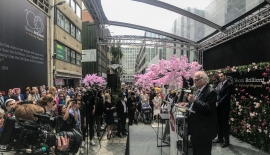 100 years ago, at the age of 19, Antwerp diamond polisher and engineer Marcel Tolkowsky was the first person to scientifically determine the perfect way to cut a brilliant diamond - 57 facets precisely positioned in such a way as to achieve the maximum brilliance, fire and scintillation. From that point onward, the round brilliant cut has been considered as the most ideal cut in the world of diamond cutting. To honor this occasion, the Antwerp World Diamond Centre (AWDC) today held a street fair, "100 Years Brilliant", to pay tribute to the most iconic and successful diamond cut in history.

In addition to the street fair, the AWDC commenced a unique project to polish a single diamond as a community.“The industry arranged to have 57 well-known (and not-so-well-known) residents of Antwerp polish a single diamond: one person for each facet of a brilliant,” explains Ari Epstein, CEO AWDC. “In this way, ‘t Steentje - which is how the diamond industry is referred to in the local vernacular - will represent the multicultural character and diversity of the Antwerp diamond industry. Once the stone is finished, it will be exhibited in the DIVA diamond museum.”

The first facet of the stone was polished by guest of honor and nephew of Marcel, Sir Gabriel 'Gabi' Tolkowsky, who is widely considered among the gratest diamond cutters of all time. (Read our interview with Gabi Tolkowsky). His many accomplishments include the priceless, 274-carat Centenary Diamond, cut from a 599-carat rough stone, which is still the largest D Flawless diamond in history, and the Golden Jubilee Diamond, the largest faceted diamond in the world at 546 carats, which was presented to the King of Thailand. He is also famous for inventing the ‘flower cuts’ for De Beers, which accentuated the brilliance of typically lower-quality stones with their unconventional angles and facets.

Speaking to crowd gathered for the occasion, Gabi said, "In 1919, when he was just 19 years old, my uncle Marcel, born in Antwerp, unlocked the secret of light within a diamond. After extensive research and experimentation, he discovered the mathematical formula for the ideal cut diamond: the brilliant. He created the 57-facet stone, the standard for releasing all the beauty of a diamond. He figured out how to get the greatest amount of light to shine out of a diamond, calculating the number and arrangement of facets to maximize the light return. This was Marcel’s gift to the world, perfecting the journey of light, giving all those who came after him the knowledge of how to turn a diamond into a 'Unique Beauty'."

The second facet of the stone was polished by centenarian Constantinus ‘Stan’ Hunselmans, who shares his year of birth with the brilliant cut. “I celebrated my 100th birthday on January 14, and it is an honor that I was chosen to polish the first facet. It went really well. If I were a little bit younger, I might have considered a career switch,” he joked. Numerous VIPs from the Antwerp political and cultural world were among the first round of polishers, as were several industry representatives such as Feriel Zerouki, Senior Vice President of International Relations and Ethical Initiatives, De Beers Group, Sergey Panchekhin, Director of Alrosa Belgium, and ambassadors to Belgium from diamond-producing countries Canada, Namibia, South Africa and Angola.

In 1940, Marcel Tolkowsky migrated to the United States where he worked in the diamond industry up until 1975 when he decided to retire. Before his retirement, Marcel worked actively in the diamond industry showing his passion and ideas for one of nature’s most precious gifts. In 1991, Marcel passed away due to a heart failure. Up until today, diamond cutters around the world use Marcel’s mathematical formula as guideline or reference when cutting a diamond.